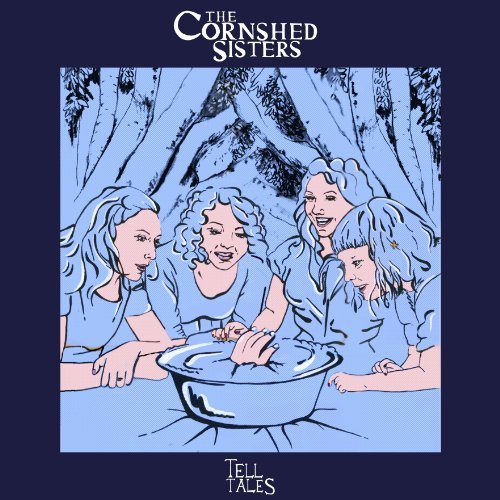 Telling Tales gladly succumbs to its own whimsy, has no stylistic compass beyond the inherent tones of a female vocal harmony group and is a delightful series of songs that are both beautiful and bizarre. »

a lovely rough trade exclusive with a 5 track bonus cd with unreleased cover versions of annie lennox, the roches, prince and two traditional songs. less alike than these four peas you have never seen in the same pod. if they were raised as sisters it was by a father who sang like an angel and by a mother who loved the devil's music. guitar pop, folk tales, protest songs, country music, piano ballads and gospel must have all gone into the same soup from which these women supped. although unified in their musical tastes, as songwriters and interpreters the cornshed sisters display a healthy disregard for unity of subject matter (reminiscent perhaps of randy newman, joni mitchell or richard and linda thompson). on their debut album 'tell tales', the ladies tackle waterbabies ('tommy'), marriage, men in sequined suits ('dance at my wedding'), gardening ('if you were mine'), soothsayers ('the beekeeper'), making pies out of people ('pies for the fair') and the axis of love and bombs ('dresden'). and, there's some unusual stuff too. drawing on a palette of vocals, assorted guitars, ukulele and piano they convey these ideas with sensitivity and humour. their four distinctive yet sympathetic voices range far and wide, recalling the emotive tangles of the band as often as the choral elegance of the roches yet sung and arranged in their own distinctly english manner.
description from www.roughtrade.com