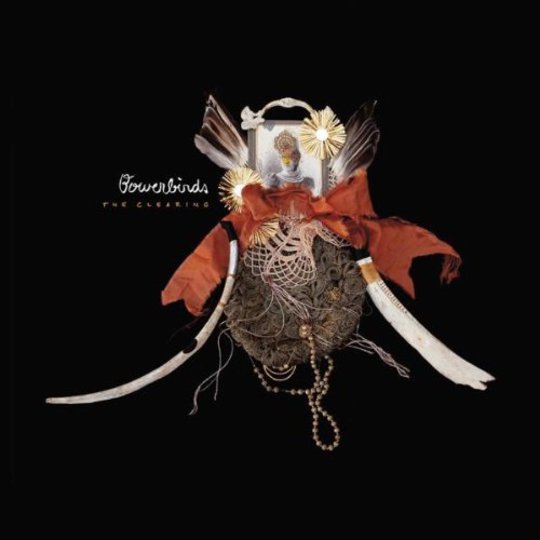 Bowerbirds seem to have undergone something of a rebirth since their last release, 2009’s Upper Air. Reading around the duo, comprised of North Carolina based couple Beth Tacular and Phil Moore, it hardly seems as if the intermediary three years have been those of tranquillity and hibernation. Tacular was hospitalised for a lengthy period as a consequence of a ‘mystery’ illness, while the pair briefly decided it best to split, only to revaluate that decision soon after.

The Clearing is quite evidently a Bowerbirds record. The heavy focus on acoustic instrumentation, the woody sounds of ageing instruments, lends the record a creaky, antiquated quality – an old country house that’s been part of the landscape longer than anyone can remember, one that yields to the elements outside and where the doors croak on their hinges. But The Clearing also makes a much bolder statement than the record’s two predecessors. Those intimate acoustics are often paired with roaring electric guitars – the triumphant conclusion to opening track ‘Tuck The Darkness In’, for example, builds to a huge, cathartic, rolling reiteration of the words “I hope my dear friend/everything falls to death/we’ll tuck the darkness in/we’ll tuck the darkness in.”

Elsewhere, Bowerbirds exhibit a more complex musical vernacular – to a large extent, the achingly pretty but often simple folk songs of their previous output have been superseded by those of a new, broader scope. These tunes take unexpected twists: chord changes occasionally seem planted to fox the listener, while subtle modal colourations offer The Clearing something that sets it apart from the majority of pale, post-For Emma cabin-folk imitations (a Bon Iver comparison, while deplorably lazy, ties quite nicely with the fact that the record was recorded at Justin Vernon’s April Base studio in Wisconsin).

Despite this, it’s still the unassuming, contemplative folk numbers that really nest in your ears. The pair burrowed in the latter half of The Clearing’s 11 tracks, ‘Overcome With Light’, and ‘Sweet Moment’, are particularly endearing in their ingenuous optimism. “Now I’m overcome with light, overcome with light/yes we had some scrapes, but now it’s right,” Moore whispers on the former, while on ‘Sweet Moment’ he celebrates a genuine if transitory sense of joy: “we both know how sudden the colours change… but this is our sweet moment.”

The Clearing is a woody, creaky, but ultimately gorgeous folk record; one that has undoubtedly sprung out of the same coppice from which once grew Upper Air and Hymns for a Dark Horse, but that stands distinct from these all the same. It fluctuates between their archetypal campfire lullabies and a new, roaring assertiveness, without ever once losing sight of its fundamentally natural, forested pastoralism. On The Clearing, Bowerbirds are, as ever, best characterised by the sounds of buzzing strings, dilapidated pianos, and ramshackle drums – but the psychological outlook here is one of sanguine optimism and forward propulsion, and to a large extent it’s this that makes the record such a success.