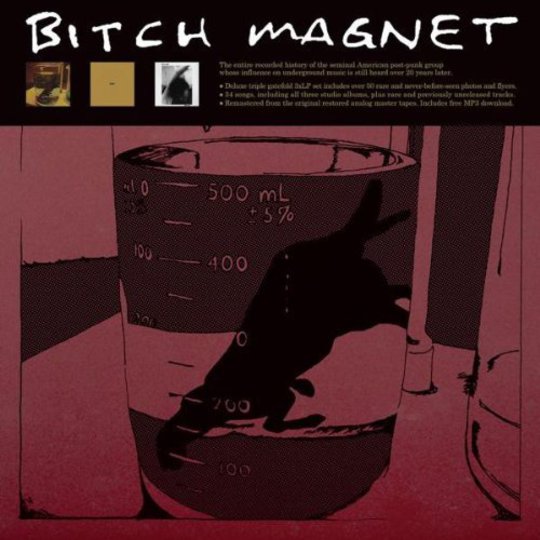 If the great musical stars of our times were awarded the opportunity to travel back through time and change one moment from their past, what would they choose? Would Neil Young avoid that endorsement of Ronald Reagan? Would Janet Jackson have kept her Superbowl nipple concealed? Would Eric Clapton resist ranting drunken, racist bile onstage in 1976? Would Kevin Rowland erase his 1999 Alan McGee-endorsed transvestite covers album? Would Bitch Magnet change their terrible, terrible name?

How many potential listeners have been repelled by that moniker and decided not to give Bitch Magnet’s music the attention it deserves? Now, thanks to Temporary Residence’s lavish reissue set of the group’s three records, it is time to look beyond that terrible, terrible name and recognise Bitch Magnet as perhaps one of the greatest, and certainly most underappreciated, post-hardcore rock groups of all time.

Formed in 1986 by guitarist Jon Fine, bassist/vocalist Sooyoung Park and drummer Orestes Morfin, the band’s debut was the Star Booty EP (1988). Generally faster than their later material, several cuts such as ‘Carnation’, ‘C Word’ and ‘Knucklehead’ are indebted to the Hüsker Dü fixation that gripped so many American bands of the era. Elsewhere, ‘Sea of Pearls’ amalgamates heaviness and catchiness so adeptly that it could have been a unit-shifting grunge anthem if only the ‘Magnet had hailed from the hotspot of Seattle (and perhaps changed their terrible, terrible name). Apparently über-producer Steve “don’t call me a producer” Albini was involved in the mixing process, but the recording has a murky, amateurish vibe which is not up to his (admittedly never exactly shiny) usual standards. Nevertheless, the lo-fi scuzziness has a certain charm and the EP succeeds in showcasing the group’s potential.

With 1989’s Umber the band hit the ground running (or perhaps striding, given the noticeable slowdown in pace). Like their contemporaries Slint’s seminal Spiderland, Umber is one of those albums that should have been recorded by Albini but wasn’t due to whatever unavoidable circumstances. Mike McMackin did a great job however, the band upped their game and Umber sounds huge. The throttling guitar work at the beginning of opener ‘Motor’ literally sounds like an engine revving up and is joined by Morfin’s pounding and near-jazzy drumming before the band launch into a chunky groove. Morfin’s drums remain reliably inventive throughout (Jon Fine claims he is “John Bonham if John Bonham could play crazy percussion”), Fine’s bass is solidly authoritative over which the guitars (now aided by second guitarist David Galt) race, thrash, chime, lurch and groan. If tracks such as the crushing and fantastically titled ‘Goat-Legged Country God’ (see, they could conceive good names sometimes) led some to dismiss Bitch Magnet as 'Little Black' (as opposed to the Big one fronted by Albini), there is plenty of evidence here that the band possessed their own unique voice. ‘Navajo Ace’ merges punk and metal with embryonic math-rock. ‘Clay’ makes full use of the very-quiet to VERY LOUD dynamics made famous by the Pixies but doesn’t sound anything like the Pixies. ‘Big Pining’ smuggles a poppy, touching chorus into an otherwise slow and brutal chug of a song. ‘Douglas Leader’, on the other hand, is a rare moment of restraint in which the band remain quiet throughout, with Park’s whispered voice as soft and unassumingly powerful as Kurt Cobain’s would be on ‘Something in the Way’.

With Albini back at the mixing desk and David Grubbs of Squirrel Bait replacing Galt, the title of 1990’s Ben Hur hinted that Bitch Magnet were aiming for something epic in proportion. They hit their target. The group expertly straddled sluggish drone-rock, industrial riff-fests, astute math-rock, sublime post-rock, poetic spoken-word vocals, post-hardcore yelling and lots more besides - and all within the first song: the excellent near ten minute ‘Dragoon’. You’d be hard-pressed to find another ten minute track as comparatively thrilling. And the excitement doesn’t end there. Ben Hur is a beast. More varied than its predecessor, with the dynamics melding together instead of competing or jarring, and with greater subtlety within the heavy framework, the album includes numerous long instrumental passages with Park eschewing vocals until they become absolutely necessary. ‘Valmead’ and ‘Gator’ remain instrumental throughout and might be described as post-rock, except that tag doesn’t quite do justice to the wild, rocking passion they project. The final track, ‘Crescent’ is indicative of the smoother direction Park would embark on with his next project Seam.

The deluxe packaging of the 3CD set is beautifully assembled. Amongst the high quality photographs there are no sleeve notes to help put Bitch Magnet into historical context and no lyric sheet to shed light on Park’s often low-in-the-mix vocals, though this means the band’s mystique remains intact despite the spotlight they have earned from this reissue and the request from Battles to reform for last year’s Nightmare Before Christmas. And for all you Bitch Magnet completists out there, the extras include Ben Hur era b-sides, a 'louder mix' of ‘Motor’ (can it get much louder?) and several early versions of Umber tracks during which Morfin’s drumming at times sounds even crazier than in the final cuts.

If you haven’t embraced them already, this package leaves you with no excuse to get over that terrible, terrible name and jump headfirst into the wonderful world of Bitch Magnet.