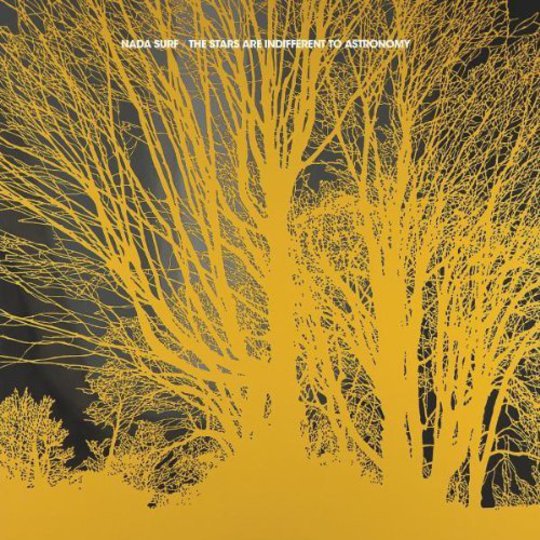 Nada Surf are clearly unconcerned about guitar music's apparent death, as they cheerily return with The Stars are Indifferent to Astronomy, their sixth album of breezy and nostalgic Nineties-style guitar rock. In a 20 year career they’ve been dropped by their record label, forced to produce a covers record, battled ruthless A&R men and have been labelled a ‘one-hit wonder.’ Noted for growing progressively softer on previous records, the New York trio have returned with more punch than ever and on The Stars…, a record driven by a formula of simple and upbeat, heavy guitar rhythms as they look over their shoulders at more carefree times. Clearly this is a band that won’t die quite so easily.

On The Stars…, Nada Surf don’t deviate much from the R.E.M/Husker Du influences present on 2008's Lucky. Sure, frontman Matthew Caws maybe in his 40s, but he exhibits all the exuberance and enthusiasm of a naive teenager and as a result, Nada Surf sound just as vibrant as any new band half their age.

Opener ‘Clear Eyed Clouded Mind’ shoots off at an accelerating pace; it is four minutes of airy, no holds barred rock that waits for no one and sets the tone with infectious hook after infectious hook. By the time ‘Waiting for Something’ follows, it’s hard not to sing along with Caws’ fluffy voice which is carried by Daniel Lorca and Ira Elliot’s adrenaline propelled drum and bass sections. ‘The Moon is Calling’ is better yet. Centred on a warm and springy, Postal Service-esque guitar melody, it evokes sensations of summer evenings spent frolicking around without a care in the world.

Lyrically, The Stars are Different to Astronomy's most inspiring moments flit between themes of youthful desire, the impact of growing up and the responsibilities that follow. ‘Teenage Dreams’ is an electrifying spree so restless, its crunched up guitars practically frolic with a hyperactive Caws. Here he reminiscences about his own inexperience where he “Asks the wrong questions but gets the right answers.” He then takes a bittersweet turn on the folky wisp of ‘When I was Young’ (“Now that I’ve grown up I wonder what was the world I was dreaming of”) as he questions his own expectations. There’s also a need for much simpler times: “You’re gonna wish that it was done / You’re gonna wish that you were young again / You’re gonna wish that it was fun,” he yearns on ‘Let the Fight do the Fighting.’ “Who will be the first? / The future’s made of dust /And we are all just rust in a machine,” he similarly reflects on ‘The Future’ with dismissiveness.

Nada Surf’s rushing guitars and upbeat drums create a sense of urgency but Caws’ nostalgic longings suggest they’re happy staying rooted in the past. The Stars are Indifferent to Astronomy might not extend their fan base massively, but when it has this much charisma, Nada Surf are perfect where they are.