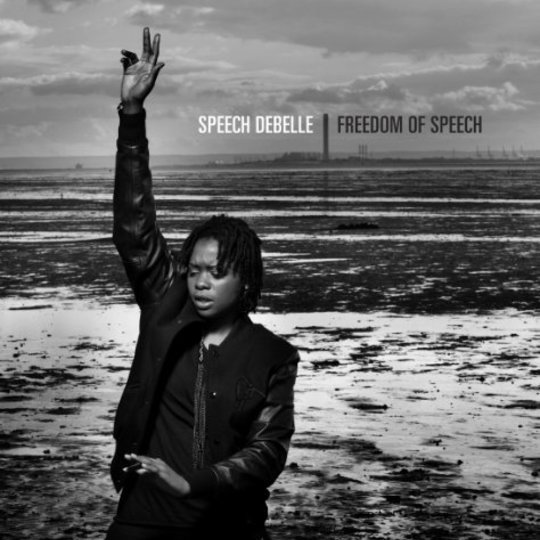 When Speech Debelle released The Mercury Music Prize-Winning Album Speech Therapy (that’s the official title now, right?), she sounded, on every track, like she was singing for survival. Not in an X Factor pllleaase-love-me kind of singing for survival. But actually trying to survive. And singing (well, rapping) because that was the way to do it. When I heard she’d won that prize, I remember, I cried a little bit. I’m not 100 per cent sure why. It felt important. Maybe it was just because I can’t stand La Roux.

But then… nothing really happened. Rumours were bandied around about her falling out with Big Dada, then falling back in with them. It all felt a bit ungracious and a bit anti-climactic. Too much faffin’. Not enough rappin’. On Freedom of Speech, Miss Debelle still sounds like she’s rapping for survival. With ‘Studio Back Pack Rap’, the album starts promisingly, as she spits at her naysayers, picking the hipsters apart from the stitches of their hi-tops to the plug-ins on their MacBook Pro. From there on in, Freedom of Speech ebbs and flows in waves; some spectacular moments and some tracks that could be filler, they could be growers – only time will determine that.

‘Blaze Up A Fire’ constitutes one of the peaks. Featuring Roots Manuva and Realism, the track was written prior to last year’s riots but is all the more eloquent in its aftermath. The track hangs on Manuva’s lines: “heat the heathens… these streets are paved with thievery / false prophets, false hope, false believery.” Speech and Roots work well together on record; both skilled proponents of the same breed of laconic rage; anger that doesn’t fight, doesn’t raise its fist but gets its voice heard nonetheless.

In keeping with her debut release, Freedom of Speech doesn’t just do social commentary; much of the album is deeply personal and picks at open wounds. A lover that won’t leave their ex alone, a father that never showed his face and a whole host of vicious bloggers trying to disrupt her destiny. Disappointingly, though she occasionally slips into lyrical cliché to get her point across and somehow the emotion gets in the way of the craft. When she gets it right, it’s powerful, when it goes wrong it feels like she’s just taped a page from her diary onto a Garage Band track. As she says in ‘Angel Wings’, though “I’m still learning / I’m still trying / and I ain’t afraid of flying.” Sure, it’s another cliché but it’s a case in point. And the best thing about Freedom of Speech is that Speech Debelle isn’t trying to be anything or anyone other than Speech Debelle, making the music she wants to make, acknowledging her faults and limitations but never apologising for them.

As a work of art, it’s sometimes sketchy, always pleasant and gentle, often uplifting, skilled and technically confident. As a statement, it’s a bold one, without screaming. What seems clear is that Speech Debelle sees music as a process, not a race and Freedom of Speech is a process worth getting involved in.