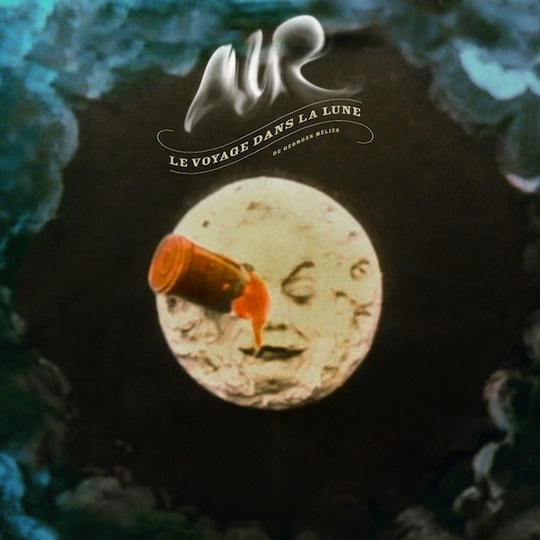 It may pale in comparison to the BBC-led Dickens hysteria which dominated our televisions over the festive period, but you could say (perhaps tenuously) that there's been something of a low-key George Méliès revival going on. The legendary French film-maker, renowned for his innovative techniques, is a pivotal character in Martin Scorsese's Oscar nomination leading film Hugo. Following closely in the footsteps of Marty are purveyors of Gallic sophisto-pop Air with Le Voyage Dans La Lune (or A Trip to the Moon), designed as a soundtrack to the long lost hand-coloured version of the iconic 1902 Méliès film of the same name, the one we all know thanks to Billy Corgan.

Air's timing would appear fortuitous given the long process of restoration that was required to rescue the deteriorated film, discovered in Barcelona in the Nineties before it was finally screened at last year's Cannes Film Festival with a brand new soundtrack by Air. So inspired were Messrs Godin and Dunckel by the success at Cannes they decided to expand the soundtrack to the 14 minute film into a full-length album. Indeed, beyond the confines of the narrative itself Air are very much in familiar territory given their predilection for all things lunar and astral (Moon Safari, 'Kelly, Watch the Stars!', 'Venus').

How effective is it as a soundtrack to the film itself? Well, based on these short clips [http://www.youtube.com/watch?v=4dTVfSJoj04&feature=related] very effective. If the rationale behind asking Air to provide a modern soundtrack was that the hand-coloured version was a slightly more modern version of the film than the black-and-white one then it doesn't quite succeed; the fashions and aesthetics of the film are too rooted in their age for the rudimentary splashes of colour to modernise the images. Nor is the soundtrack strictly modern sounding, in fact the smooth funk grooves, warm keyboards and swirling sound effects are of a decidedly retro-futuristic bent. Yet, ultimately the music and the film emanate a shared spirit of adventure, drama and optimism that makes it click together. Additionally the pseudo-psychedelia of 'Sonic Armada', with its warbling organs and squiggly synths, and 'Parade', with its creepy backing choir and mid-song bleep ridden meltdown, actually suit the somewhat hallucinatory effect created by the blurring of colours over the moving characters.

Most importantly, as an album separated from its visual context, Le Voyage Dans La Lune still feels like a sci-fi adventure while striking a delicate balance between scene setting atmospherics and catchy melodies. The aforementioned 'Parade' surrounds its more outré moments with passages of urgently nagging surf guitar and cheery organ tones. The influence of other soundtrack composers is evident in the Morricone-style guitar clangs on the aforementioned 'Sonic Armada' and album opener 'Astronomic Club'. Likewise the same song's Spanish guitar, which somehow sits coherently next to prog-rock keys, buzzing lounge guitar and noirish brass stabs. Just as often, however, the duo prove that they are still an electro act at heart; the 'Cosmic Trip' sees waves of vintage keyboard washes over a crystalline clockwork synth heart, which is too bustlingly pointillistic to have a hook, but is a gorgeous concoction nonetheless. On album closer 'Lava' their array of vintage synths provide a warm woodwind-esque blanket of sound which is interrupted by a curve-ball of plucked banjo, before some saxophone impersonating synth squeals its way to a towering climax. Unfortunately not the exquisite conclusion the song deserves.

By comparison Beach House's Victoria Legrand's gradual upward inflection on the climatic verse of 'Seven Stars' provides a more a tasteful sense of ascendency following the mid-song countdown to take-off. She's as effortlessly on form here as she is in her usual more earthly dream-pop surroundings. The same cannot be said of Au Revoir Simone's contribution to 'Who Am I Now'; despite starting off in affectingly eerie tones the melodies and rhythms of the vocals and spindly guitar are too close and feel mechanical despite the trio doing their best to sound like space sirens.

The fact that it was conceived firstly and partially as a film soundtrack does leave Le Voyage Dans La Lune feeling slightly uneven and there are no doubt those who have no interest in hearing a largely instrumental soundtrack removed from its source. That said despite being twice the length of the film it soundtracks the album still clocks it at around 30 minutes and captivates enough with its sense of atmosphere, drama and melodic capabilities to make those 30 minutes fly by like a rocket straight into the moon's eye.