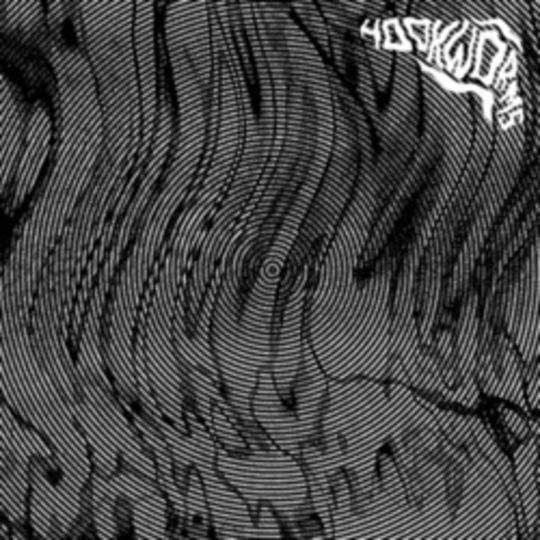 This debut Hookworms album has been perambulating around the underground for some time; echoing soundly off the walls of the Internet whilst the band gathers congratulatory gig reviews like sycophantic moss. Initially, it was released on cassette – meaning perfect driving music for those of us with ancient motor vehicles that accept such archaic devices (who’s laughing now, eh, ALL OF MY PASSENGERS?). More recently, it has been awarded a vinyl release (complete with download code for those still scratching at their CD players and laptops in modern confusion).

The album itself is brief. It’s barely an album, technically, due to that brevity. But it feels as though it lasts forever and for no time at all. The Alan Vega-esque vocals, effected to within in an inch of their lives are wrapped in enough persistent feedback to hypnotise you into thinking that you have been immersed in the sound of the vinyl disc spinning around endlessly, for hours and hours.

Live, the band have the same effect. You notice someone lifting their guitar over their head, detaching the strap. The feedback is abruptly interrupted by the promoter’s chosen soundtrack. You check the clock warily, to see how much time may have passed since you were last aware of your own existence. When almost a minute of near silence fades to zero at the end of ‘Resolution’, the final track of Hookworms, you wonder if, indeed, you have been listening at all. So you lift the needle and drag it back to the start. In short: it is addictive.

Hookworms are masters of the kind of psychedelia that would sniff at the thought of chemical enhancement. The vocals bounce on top of repetitive bass lines and droning synths; an endless cycle of knowing where the song is going next but never really knowing. There’s little in the way of distinction between the tracks; a change of vibe, perhaps, but they rumble on in a comforting manner. Guitar lines trip into place from somewhere in the past. Traces of a story rear their head in ‘Teen Dreams’ (probably the strongest track on the album. Though it’s unlikely that we would ever ask the tracks to fight and prove this). A tale of a “race car driver” ricochets around the cacophony of the track like a Fifties melodrama and you imagine he looks like a young James Dean.

Hookworms is equal parts space and noise; enough going on to keep you hooked (excuse the pun), enough space in the tracks to set the listener’s imagination free. Whilst cassette tapes rattle about in decrepit motors and vinyl platters suffer motion sickness from repeated spins, one can only hope the band are working on a lengthier release, before hypnosis slowly grinds the nation to a halt.