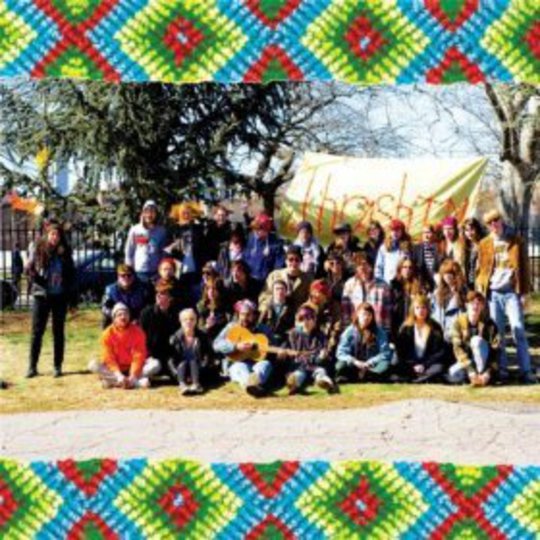 An album this obsessed with the Nineties could only have been made in 2011. Thrashin, the debut full length from Total Slacker, rides the wave of all your favorite grunge pop without falling prey to nostalgia. The stars are in full alignment: the Pixies are in the third house, Eddie Vedder is in the minor aspect, with Nirvana rising. During the twentieth anniversary year of the seminal album Nevermind, we might find ourselves asking how far rock'n'roll has progressed since the scions of Seattle shook the earth. Based on Thrashin, the answer is: not very far at all. The Brooklyn-based trio hitsa lot of the same notes as those masters of yore – and they know it, playing up the fact with an ironic glee that will variously shock, appall, and delight.

'No Mo 4Loko' is a barefaced rip of the chord progression from 'Smells Like Teen Spirit'. If the music scene wasn't so far removed from the heyday of the scions of Seattle, the 'tribute' would rankle the ranks of the rock'n'roll purists. But in 2011? Who could bat an eye? Hearing those four chords used to lionize a corporate alco-pop beverage '4Loko,' targeted like a poison dart at the livers of bored suburban youth, it's hard to imagine that Kurt Cobain wouldn't have appreciated the joke. America's youth, disowned, left to fend for itself in a domestic landscape of demagoguery and warmongering, only to be re-adopted by predatory corporate interests intent on squeezing out all the kid's spending money in trade for cheap hedonism. 4Loko, Teen Spirit, whatever – capitalism will never tire of preying upon the most defenseless. Chalk up 'These Condos Don't Belong' as another political screed from the Nineties, a cranky outburst directed in the general direction of gentrification (although it's hard for a Brooklyn-based band to throw stones...).

Tracks 'Stealing From Salvation Army', 'Time Traveling High School Dropout', and 'Stuck in '93' fill out the picture of a band thoroughly at home with its atavistic pop culture swagger. The latter song is a sustained shout out to the gutter gastro-entertainment junk of the Nineties: Full House, the Olsen twins, Doritos (in fact, the indecency of the artificially-flavored chip is a recurring trope throughout Thrashin), Crystal Pepsi, Sega – one is unsure whether to fall into a nostalgic swoon or shudder in revulsion. That's probably as intended: Total Slacker take a special pleasure in rubbing our noses in the paltry excess of pop culture's past.

Cultural commentary aside, Thrashin thrashes. It's a bit of a shame that Total Slacker's penchant for cute word-smithing distracts the listener from the nuts-and-bolts musicianship that makes up the album. Lead guitarist/vocalist, Tucker Rountree, is a special talent. Bassist Emily Oppenheimer and drummer Ross Condon provide a reliable rhythm section and some solid backing vocals, but really, if you don't walk away from Thrashin with the single-minded impression of guitar greatness, then you likely were not listening to the same album as the rest of us. The ten minute epic 'Koolz McRulez' is an alarmingly effortless gem of 'journey psych,' powered by nothing else than the querulous musical imagination of Rountree, and a steady rhythm in back. The music scene is taking note: Sean Goggins of Northhampton's Lord Jeff has publicly called out Rountree to what is known in six-string circles as a 'shred-off,' a free-for-all thrashing contest for the ages. The challenge has, as yet, gone unmet. Until the shred-off, Thrashin will keep us well sated, with hooks, wisecracks, and iridescent orange Doritos stains.