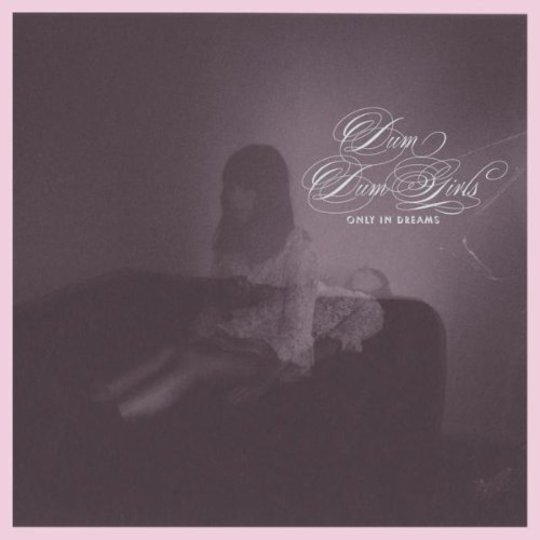 For all that is alluring about the Dum Dum Girls, there’s the ever-present danger that the mask might slip. The idea of a all-girl four piece dressed in black lace and singing their doo wop blues behind an artful scuzz makes for a striking image but one that’s hard to embrace with anything other than icy nonchalance. There’s more to music than iconography and on their debut album I Will Be, it seemed Dee Dee, Jules, Bambi and Sandy were preoccupied naming themselves after rejected dwarves from the Snow White movie to grasp this concept.

The sublime He Gets Me High EP did a lot to put some flesh and bones on an immediately arresting but ultimately flaky concept. A set of crisp new production values and some swooning new songs introduced a band more comfortable with the idea of dropping their aloof personas and revealing something not so premeditated. Bearing all this in mind, Only In Dreams feels a lot like a half-hearted attempt to close the door marked 'private emotions' long after the horse has bolted.

Sadly enough, frontwomen Dee Dee is not short on torturous material with which to fill her band’s second album. In the brief timespan since her band shot to indie stardom and mass Tumblr lust, her mother, the coverstar of I Will Be, passed away and she’s spent a large amount of time in the absence of her husband, the Crodiles’ Brandon Welchez. Where these grievances are addressed in the likes of ‘Hold Your Hand’ and the title track, they both fit so easily into the standard Dum Dum Girls template of panging Sixties pop, it’s extremely hard to tell if you’ve witnessed anything out of the ordinary.

As the tangy churn of ‘Always Looking’ and bittersweet melancholy of ‘Bedroom Eyes’ go to show, Dee Dee and co are getting pretty good at panging Sixties pop but you can’t help but ache for a song that doesn’t reek of carefully constructed pastiche. ‘Coming Down’ is the closest the Dum Dum Girls come to breaking free of their self-imposed binds of composed cool, naturally it’s the best thing on the record by a country mile. Slowed down and stretched over six minutes, the band sound removed from their influences and, for a lack of a better word, genuine. You’ll believe the story they sweetly croon over aching guitar chords.

Just as Only In Dreams confirms this bunch of self-anointed femme fatales as an impressive songwriting outfit, it’s stands as a warning that their outwardly-facing facade is wearing thin. For every abstract placeholder employed to keep that mask in place, there’s another worldly force pulling it out of focus. It’s time for the Dum Dum Girls to join our sordid reality rather than swoon at it from afar.