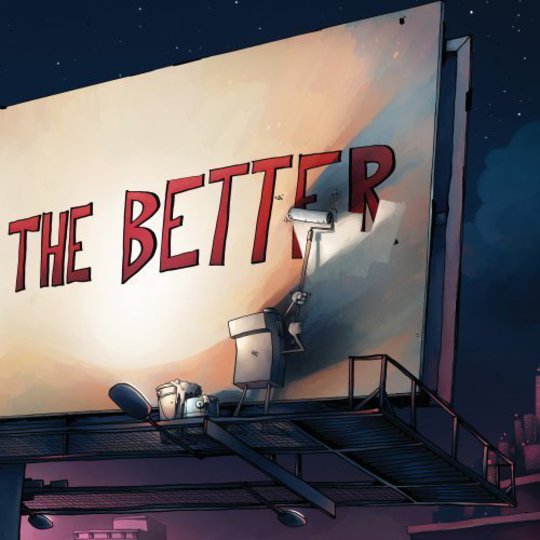 Among the moody trippy-hippy-hoppy tunes of DJ Shadow’s monumental debut Endtroducing was a short, cheeky track entitled ‘Why Hip-Hop Sucks in ‘96’. The rap-spoofing groove lasts a few seconds before the composition abruptly ends with a damning voice declaring, “It’s the money”. Whereas back then Shadow condemned the detrimental effect that unrestrained excess was having upon the musical landscape, it now seems to be musicians’ lack of capital which really gets the Shadow’s goat. Using interviews to vilify not just illegal downloading but the internet, technology and modern life in general, he’s starting to resemble the crotchety luddite Lars Ulrich behind a set of decks instead of drums.

It’s an attitude that is also promoted in his current artwork and website design, which feature cartoon depictions of sneering, vandalistic mp3 players and laptops pushing pins into musical notes and throwing records in the bin. Shadow claims this is intended to “satirize” himself, but his real target is the current techno-cultural climate and the self-appointed critics of the digital media age. As graphic satire goes however, it’s hardly as shrewd or as penetrating as Hogarth, Gillray, or even Hagar the Horrible. Putting the morality of filesharing aside, it’s hard not to notice that the most vehement opponents of change, from Shadow to Metallica to even Mclusky/Future of the Left’s Andy Falkous, are also those whose quality of output has seriously declined. The music industry is not what it was, but it does help to be making music worth paying for in the first place.

It might be unfair but it seems Shadow will forever be under the (erm) shadow of Endtroducing. That’s the curse of making a brilliant record. Its follow-up, The Private Press, had its inevitable detractors but was actually rather solid; tracks such as ‘Blood on the Motorway’ stood up well against anything from the debut. The extensive criticism of 2006’s The Outsider was more on the mark. Artists should by all means be encouraged to evolve, experiment, and avoid repeating themselves, but for God’s sake not if it involves roping in members of Kasabian. Swamped by other lacklustre collaborations behind which Shadow failed to shine, it was a misfire.

Thankfully, Shadow curbs the guest vocals for The Less You Know, The Better. De La Soul’s always reliable Posdnuos is joined by Talib Kweli on the cosily old-school ‘Stay the Course’. Later, however, Shadow fails to get the best out of Little Dragon in the way Damon Albarn can, churning out an imitation of a particularly dull Prince ballad. The real nadir is the horrible ‘Warning Call’ on which Tom Vek drama-croons his pithy sub-sixth-form “It’s cool to be you / When you like what you dooooooo” slogans over a diluted Sisters of Mercy reluctantly forced to insert their last 50p into an underwhelming Eighties arcade game. Some acts can pull off this hypnagogic retroism shtick (Gary War with his more demented and hyperactive vision for instance) but Shadow and Vek bodge it massively.

More successful are the tunes on which Shadow lifts the vocals from older records. ‘Sad and Lonely’ and ‘Redeemed’, for example, are sublimely soulful (if a tad reminiscent of Play era Moby). It has always been instrumentals where Shadow really sparkles, or near-instrumentals where the voices are cut up or distorted and employed in equal balance to the other samples, all amputated and sewn back together as part of a greater whole. ‘Enemy Lines’ achieves this, warping the vocal snippets and seamlessly blending them into the sedated funk backing.

Overall, this is a highly schizophrenic collection. There’s metal riffing, acoustic-tinged balladry, industrial post-apocalyptic soundscapes, floaty funk, jazzy funk, poetry excerpts, and a closing reprise that sounds like some post-rock troupe from the Constellation roster. Whereas the first two albums had variation as well as a vaguely coherent, overarching mood, this is more like a mixtape carefully assembled by somebody desperate to demonstrate the diversity of their musical tastes. Does it justify its price tag? It’s certainly a step in the right direction and there’s an energy and a hunger that was absent from The Outsider, but the variety of disparate, unconnected styles means that although most listeners will like some, few will like all.