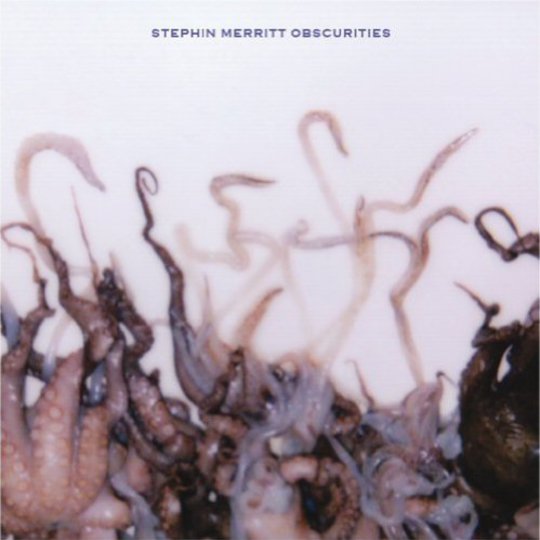 As a compilation of unreleased songs, b-sides, and other assorted tracks from his various musical ventures (The Magnetic Fields/The 6ths/Gothic Archies etc) Obscurities has a broader remit than many Stephin Merritt releases, such as the travel-themed Charm of the Highway Strip or the dichotomous sonic vocabularies of Distortion and Realism. However, although it may lack the thematic consistency of his most recent releases, quality-wise Obscurities is at least on a par with his post-69 Love Songs no-synth-trilogy.

In fact a pure joy of Obscurities is hearing Merritt's multi-layered synth orchestra again, most apparent on the 1998 7-inch single version of 'I Don't Believe You', pre-dating its appearance on 2004's i, but remaining (appropriately) obscure. The original single version is typical of the Magnetic Fields sound pre-69 Love Songs featuring pointillistic gurgles and swirls of synth (where the 2004 version features the wholesome urbane folkiness of banjo, plaintive acoustic strumming and chamber-pop string arrangements). The alternate version of 'Take Ecstasy With Me' succeeds on similar terms. Whilst Susan Anway brings greater delicacy to the vocals and panpipe keyboard presets render the verses a little more twee, barrelling tom beats up the rhythmic intensity; otherwise all the signature features are there from the güiro scratching intro to the euphoric snake-charmer synth melodies of the chorus.

Merritt also redeploys vocal duties on the lilting country update of 'Plant White Roses', previously released as a Magnetic Fields song on the Merge compilation Rows of Teeth, but here attributed to early moniker Buffalo Rome with Shirley Simms on vocals. This time Obscurities boasts the far superior version, with Simms' vulnerable rendition of lines such as “Plant white roses and learn to cry, if I can't spend my life with you” made all the more affecting for the stripped back acoustic accompaniment compared to the somewhat sub-Charm of the Highway Strip motorik pulse of the Merritt-sung version. There's no question that Merritt's authorial signature is evident in each track though, regardless of pseudonyms and rotating vocal cast. There's no mistaking the disdain/fascination with New York decadence (“Yet another nightclub-hopping, diet pill-popping sex machine/Yet another maid to order destined for the silver screen”) on 'Yet Another Girl' by The 6ths, Merritt's group fronted by a rotating cast of the who's who of Nineties indie-rock (though on this occasion Stuart Moxham of Young Marble Giants). Merritt is the LA-loathing frontman for The 6ths himself on the acerbically jaunty B-side 'Rot In the Sun', sneering “You get signed to a major Top 40 label, blow David Geffen, blow Seymour Stein”. I'm unsure as to whether he beat Belle and Sebastian to that particular Nineties indie-pop milestone or not.

Of those tracks which were previously released it's easy to see why some of them never made it beyond B-side status. 'Long Vermont Roads' B-side 'Beach-A-Boop-Boop' sounds exactly as you'd expect it to, a charmingly crude surf-pop number, but lacking the hooks to connect. 'I Don't Believe You' B-side ' When I’m Not Looking, You’re Not There' is another to file under “curiosities”, a messy attempt to use as many different keyboard voices in as short a time as possible. The percolating arpeggios and angry-wasp hooks of 'Rats In the Garbage of the Western World' are enthrallingly nihilistic, but the Numan-lite squalls of the previously unreleased 'Scream (Till you Make the Scene)' are just plain ugly.

The unreleased material is mainly excellent, however. The high standard of the tracks from Merritt and Daniel Handler's (aka Lemony Snicket's) science fiction musical Song From Venus make its unfinished status all the more disappointing. 'Forever and a Day', which opens Obscurities, is classic Merritt romanticism, just his ukulele, spare piano notes and knowingly soppy lyrics “ You'll never be alone/You're my sine qua non/and I'm a baritone/Marry me”). The staccato bass of the pretty 'Song From Venus' is treated with a suitably B-movie style wobble effects and 'When You're Young and In Love' is simultaneously joyously silly and mockingly profound. Most impressive of all the unreleased tracks is the 69 Love Songs cast-off 'The Sun and the Sea and the Sky'. Perhaps lines like “I know the rain is not profound and autumn's not symbolic, and the wind does not make lonesome sounds”, were just that bit too sombre for that record, but the fact that Merritt can leave a track of such downbeat majesty off an album with 69 songs is a sign of his wholly justified confidence in his own songwriting ability.

For completists Obscurities is a must. For Magnetic Fields fans it's a worthwhile starting point for Stephin Merritt's other projects. For newcomers, start with 69 Love Songs and come back when you've fallen in love with everything else.