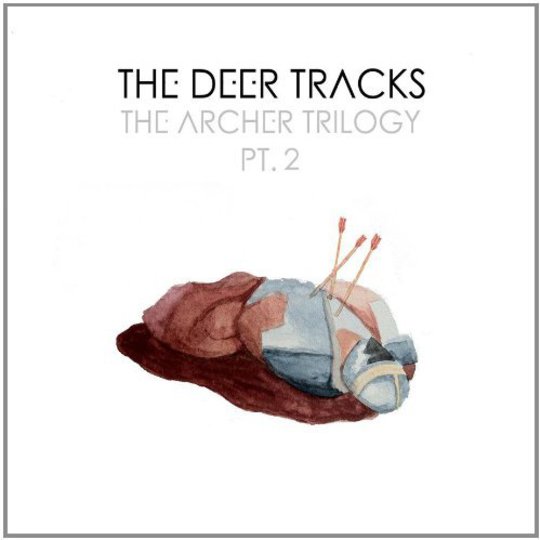 We all know the legend of ‘Justin Vernon and the Lonely Log-Cabin’, as well as the (rather good) album which it gave rise to. To me, then, when I read the press release provided with The Archer Trilogy pt.2, it seemed incredibly rash that some young Swedish upstarts called The Deer Tracks (or their PR people) had so brazenly hijacked Vernon‘s log-cabin bandwagon. Luckily for the Swedes, though, they have just about gotten away with it, as it seems that while we were all wetting ourselves over the ‘return of guitar music’ (me included), they were benefiting, as Vernon did, from the isolation of their habitat - knuckling down and doing their synth-soaked thing.

‘Synth-soaked?!?!’ I hear you Bon Iver fans cry out in despair. Yeah… I hate to break it to you, but if you’re hoping for some suitably ‘Vernon’ tunes, you’re going to be disappointed. Furthermore, I feel it is my duty to chastise you for stereotyping all log-cabin-dwelling musicians as bearded lumberjacks with acoustic guitars. The Swedish duo, David Lehnberg and Elin Lindfors, are, in fact, purveyors of music electronic in nature and about as far from lumberjacks as you can get. Their tracks are enveloped in sounds - from twitching drum machines to bass beats to spiralling synths - which are surely laptop-spawned, and any time that‘s not spent composing is clearly spent experimenting with their vast - not to mention exotic - make-up collection.

Also, if you think about it really, this ‘log cabin’ they live in must be fucking space-age. I mean, these two have been practically throwing synthetic sounds all over their proverbial canvas without a care in the world. Justin Vernon of 2007 must be green with envy, cradling his battered six-string in that gammy old cabin of his. The highlight of his day is probably whipping out the trumpet at the end of For Emma.... Poor sod.

Anyway, Bon Iver and OTT make-up aside, The Archer Trilogy pt.2 is a good album, if not a great one. Lindfors’ vocals are deliciously soft whether she’s singing in Swedish or English, and the instrumentation is soaring and atmospheric, though this album is full of darker, heavier beats that give the songs more energy and purpose than those in the first instalment. Lehnberg still, however, utilises the anthemic strings that dominated the previous EP, and the tracks almost always build to climactic crashes of sound. Opener ‘Meant to Be’ buzzes into life, twinkling luxuriously as Lindfors croons, but soon builds up with crunching guitar to an inevitable string breakdown. ‘Tiger’ becomes a swirling pool of synth energy, and ‘Dark Passenger’ progresses with a striking beat, slowly building its sinister momentum until it breaks down into a swoon of strings.

In fact, you kind of get the impression that there’s a formula to these songs - they start soft and gentle, they often seem to build in up to a string breakdown and they are dominated by a need to be ‘epic’. This can be extremely frustrating at first, although as you get to know the album it‘s less apparent. The final track, ‘U-turn’ stands out from the album in this sense, revelling in the simplicity of its lo-fi lullaby, and also showcases something else rarely seen in the other songs - lyrical depth. Elin Lindfors lamenting “always making u-turns whenever I’m close to feeling the truth” almost offsets the clumsiness of many of the other lyrical conceits - for example, the pre-chorus of ‘Fa-Fire’’s ruination with : “I wanna break your neck, just to give you a reality check ”.

Now I know so many reviewers come out with ‘watch this space’, but, seriously, watch this space. Maybe The Archer Trilogy pt.3 (billed as an EP) will be a masterpiece. Maybe not. All I can tell you is that this album is good enough for me to be seriously crushing on Elin right now. And I’d like to think I don’t just crush on anyone.