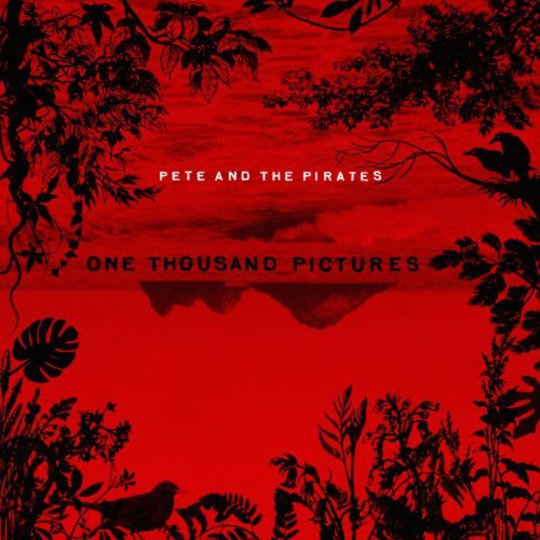 It is quite fitting to be reviewing One Thousand Pictures so long after it was released. Three long years have separated Pete and The Pirates' excellent debut record Little Death and this follow up, with the Reading quintet taking three attempts to produce an album that they were satisfied with. Worrying news for those on the outside looking in.

Five minute long first single ‘Come To The Bar,’ with its surprisingly downbeat, bleak aura didn’t alleviate the impending fear that Pete and The Pirates might piss it all up the wall. On first listen it felt almost like they were trying to alienate their existing fans. No, it isn’t exactly a Kid A change in direction, but It isn’t as immediate as their earlier work. The worries resurfaced when first encountering positively lethargic album opener ‘Can’t Fish’. After a few listens the songs grow on you and it becomes clear that One Thousand Pictures is progress. PATP have enhanced their sound and built on what they are good at. They've incorporated electronics and FX pedals to add complex layers that enrich their guitar based set up. ‘Shotgun’ and ‘Winter 1’ are the most obvious examples of this new direction that will no doubt influence their future endeavours. Still, a chunk of the album - ‘Motorbike’, ‘Washing Powder’, ‘Little Gun’, ‘United’ and ‘Half Moon Street’ - isn't too far removed from the catchy, heartfelt, quirky Pop that PATP became renowned for.

The thing that sets PATP apart from their peers is melody. There are always hooks that you can’t escape in their songs. The lyrics are at times wide-eyed and innocent, the rest of the time they are just plain baffling. It’s hard to decipher what the songs are about. Whether it is metaphors buried in metaphors, or the songs really are about cats and washing Powder. The only definite recurring themes are Relationships and drinking. It doesn’t really matter that much though, One Thousand Pictures is too enjoyable to get hung up dissecting couplets.

The sticking point for me is the inclusion of ‘Reprise’, which is basically ‘Blood Gets Thin’ without vocals. It feels a bit self-indulgent, unnecessary. Not that it’s terrible. It is just odd logic. There is also the debate as to why they re-recorded stopgap single ‘Blood Gets Thin’ for the album (twice), but not the other track from that double A-side release, ‘Jennifer’. Both are great songs. I suppose to make a good album you sometimes have to leave quality material on the cutting room floor.

In hindsight, the protracted and aborted recording sessions that lead to this release were probably a blessing in disguise. Letting the band hone the material and make it as good as possible. Nobody likes waiting years for an album to come out, but there is nothing worse than waiting three years to listen to a bad album. Thankfully, One Thousand Pictures was well worth the wait.