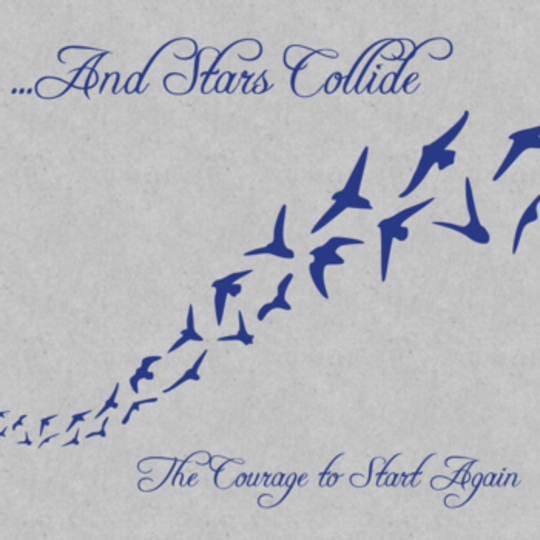 A wise prophet once said that one should not judge a book by its cover and, by extension, an album by its accompanying band name. However, when that band’s name is that of Nottingham-based instrumentalists …And Stars Collide, replete with opening ellipsis, it’s difficult to judge them as part of anything other than the post-rock scene. Indeed, the album’s title The Courage to Start Again, in combination with a plethora of epically vague track names (‘Together We Glimpsed the Heavens’, ‘The Sky Weeps and Stars Collide’) resemble a caricature of the genre, rather than a reinvention.

Still, aspirational subject matter is no reason to dismiss the album’s aural content. The Courage to Start Again begins competently enough, as ‘Corridors’ constructs a familiar, yet engaging, sonic landscape from a number of interlocking, moody guitar lines and frantic drum rolls. Soon after, ‘When Our Eyes First Met’, contrary to its syrupy title, opens with a frenzied cacophony of riffs. Unfortunately, the two minute mark brings with it the composition expected of the title: a contrived effort to recreate Explosions in the Sky’s success, albeit without the same sense of melody or variety. Perhaps the fiddly guitar solo in the track’s closing minutes is the way in which The Courage to Start Again “defies the post-rock blueprint”, as the press release so earnestly states, but otherwise the band fail to differentiate themselves from the instrumental herd.

In fact, the mere mention of 'post-rock' in the album’s press release is a bad omen; it is reflected in the band’s attempts to implement melodies and dynamics so stereotypically emotion-worthy that they have become uninspiring. As tracks like ‘Together We Glimpsed the Heavens’ and ‘The Sky Weeps and Stars Collide’ pass with little fanfare, the album meanders through a number of loud-quiet movements, never really doing anything wrong but never doing anything particularly right either. And therein lies the problem: this is instrumental rock by numbers, like rearranging a series of post-rock-shaped blocks to form a trembling, structurally unsound Jenga tower.

Events take a turn towards the vaguely interesting with ‘Ships in the Night’ and its menacing, distorted basslines which, unfortunately, underpin a selection of space-filling, rather than memorable, guitar melodies. However, this may well be the reason why The Courage to Start Again could occupy a place on your computer or (am I dating myself here?) CD collection: its purely functional compositions, polished off by a clean, clinical production, make for perfect accompaniment to that essay you could never quite finish or to a particularly moody dinner party. Background music, then.

All things considered, it’s a shame that …And Stars Collide are at their best when they indulge in all-out rock instrumentals, as much of The Courage to Start Again is spent pandering to the Explosions in the Sky weepy-guitar, cinema-score archetype. While the album’s volatile opening and closing tracks come closest to capturing genuine tension and emotion, everything in between fails to command attention. Let’s hope …And Stars Collide stick to their principles and do indeed gain that all-important courage to start again because, at the moment, they’re struggling to make their own voices heard.