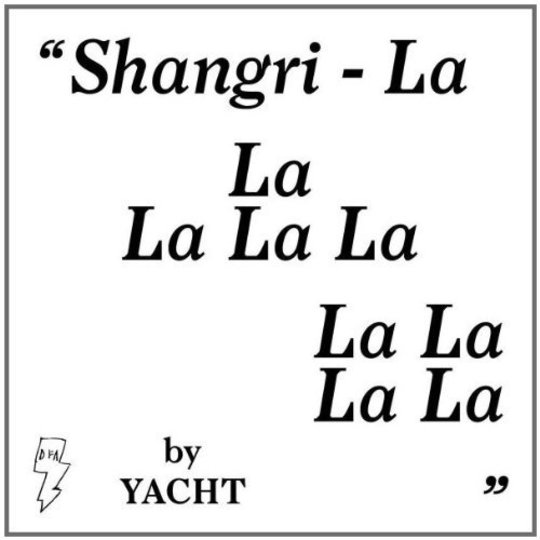 No one likes a po-faced electronic band. Okay, quite a few people like po-faced electronic bands... but you have to wonder where Kraftwerk would be without the sense of humour that dared them to write a 23 minute ode to a stretch of concrete. Could Boards Of Canada have endeared themselves to so many if they hadn’t randomly inserted the word “orange” at various junctions in ‘Aquarius’? Who would bother listening to Hot Chip without their lamentable taste in knitwear?

YACHT understand this. The press release for their fifth album, Shangri-La, comes with a timeline of 'important moments in the history of thinking, writing and trying utopia.' If it had come with an infographical breakdown of the states of earthly paradise, I may well have framed it. None of this tomfoolery is hilarious enough to distract from the music - you wouldn’t want it to be - but it does elevate a pretty good album into a loveable one.

If nothing else, Jona Bechtolt and Claire L. Evans know how to charm the spots off a leopard. Sure they’ll varnish their record with a lofty treatise on life, the universe and everything but this will sit along such witticisms as, “If you want me to be your friend I will be your friend and if you want me to be your god I will be your god.” It is philosophy in the form of a Dr Seuss book or how Dr Seuss’ would write his dissertation.

Plus the tracks themselves are not to be sniffed at. YACHT’s particular brand of digitised melody isn’t wildly innovative. Rhythmically strict beats matched with a kaleidoscope of synthesized pings and whooshes have been worked in stranger frequencies of the listenable spectrum. What the juddering holler of ‘Utopia’ and militant stomp contained within ‘I Walked Alone’ go to show however, is that quality songwriting will always allay such bugbears. ‘One Step’, ‘Dystopia’ and ‘Beam Me Up’ all mark themselves out from the pack by way of their sheer hip shaking catchiness.

It is ‘Tripped & Fell In Love’ which is the throbbing standard bearer for the rest of the LP though, thriving as Evans’ deadpanned vocals cling resolutely to an ebb of sanity under constant attack from a pitch-shifting sway of Korg. Insane but lucid, like a coyote with tourettes, that’s the YACHT way and it works a treat on Shangri-La right down to its self-titled closing track, which throws a joyous curveball by way of its curiously reflective harmonies.

Even in the context of what is turning out to be a stonking year for electro-pop, YACHT have concocted a record to match their peers in Metronomy, Cut Copy and Friendly Fires. The timeline on Shangri-La's press release tells me it has taken humanity since the fall of Adam and Eve to reach this state of transcendence. Now the world is wise enough not to trust a talking snake, the future bodes very well indeed.