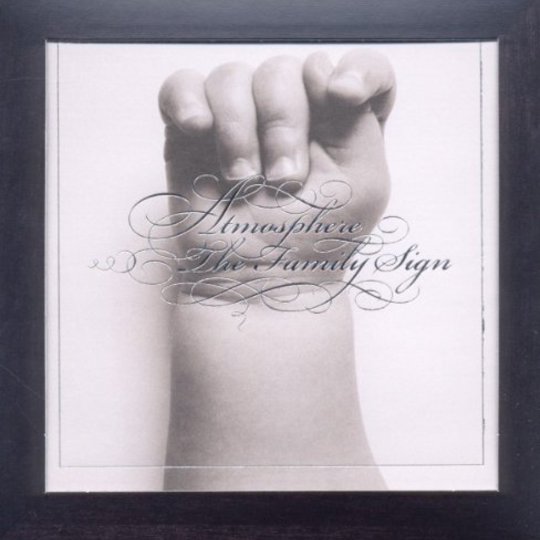 Atmosphere have always been a great rap band. A band that up the ante by giving rap's street tough sound much more shading, more love and attention than high street, guns-n-girls hip-hop. These details generate greater emotional resonance. Their last full-length When Life Gives You Lemons, You Paint That Shit Gold was a truly downbeat crawl through the streets of life without reason, collecting personal snapshots and more often than not letting their fate remain unresolved, encouraging the listener to decide the outcome.

The Family Sign is warmer in sound with a live guitarist and keyboard player added to the recording process. There’s a barroom feel to a number of these tunes, a more traditional blues sound. This isn’t to say there’s a more optimistic tone to the tracks, quite the opposite. This added warmth gives their tales greater sadness, a fleshier feel.

‘I Don’t Need Brighter Days’ exemplifies the band’s ability to push their own parameters: opening with a soul vocal there’s a strong and interesting conflict between the electronic downbeats and guitar licks as they blast with sincere blues-power. Tied into a single composition, these contemplations flash vividly. Bookended with the single line of “I don’t need brighter days/I just need some faith,” rap, blues, electro combine to create one of the most powerful moments Atmosphere have put to record.

There’s a constant mix of sadness and humour as well. The tales are low undoubtedly, the production lean but the some of the arrangements push back. 'Ain’t Nobody' rasps with the harshly trebled guitar peals of a Blue Bob Lynch jam and a chorus of “Yeah I came to party/but I don’t want to party with you/I ain’t nobody.” The track is unwelcoming, a nightmare of a party populated with anger and confusion, yet melodicas drop simple pop hooks in that give glimpses of fun and colour. Similarly ‘Your Name Here’ has rapper Slug delivering an immediately arresting account of a character from his past, their history lovingly recounted, the partner’s bright future celebrated and an expectant reunion built towards. It’s cut short with, “No, I don’t miss you,” over pianos that tinkle emotionally.

In 'Something So', Atmosphere pay tribute to their new children, “People tell me I’m not qualified/To lend my voice to something so beautiful.” As ever the beat isn’t a party, but there’s a dawn painted; over light guitars, Slug sings as much as raps about expectant fatherhood and contextualises the ever-discussed life journey with fervour and defiance. It’s interesting to hear his personal reflections so proud and thankful as an artist who predominantly trades in uncertainty.

The Family Sign is a strong continuation and addition to a powerful series of modern rap albums. It’s bigger than past records and heavier, a nice combination that genuinely puts the listener into an emotional flux.

There is a Way