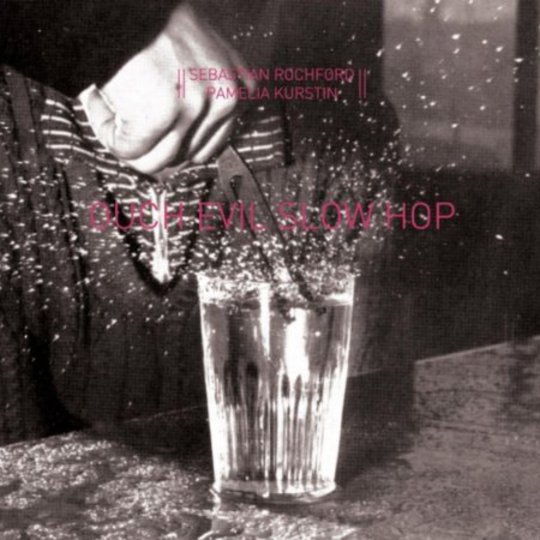 “They all fall on it like crazed animals, scoff the lot and then lie around waiting for a DJ to play music that sounds like this” says Sir Bernard Ingham, clutching the rave drug Cake in 1997's Brass Eye, and a stereo bleeps. “Now to the speeded up brain of a user,” continues David Amess MP, unaware that Cake is a made-up drug, “that sound lasts for four hours, and sounds like this.” What's then played is a distorted, swampy noise which stretches far past anything Amess' brain can deal with. Sebastian Rochford and Pamelia Kurstin's album Ouch Slow Evil Hop reminds me of nothing more than this very noise; the only notable difference is that Ouch Slow Evil Hop, thankfully, has rhythm.

Taken as a whole or track by track, it's a sound that accompanies an extended visit to realms of drug-addled monging. Imagine a night that's taken a turn around some sketchy corners and you've chanced upon some Cake-like substance in the toilets – this heavy, marauding album will be all you can hear. First track ‘Ouch (I)’ kicks in, sounding like an especially violent game of Space Invaders, and you might try to dance, but Rochford's drum rhythms keep taking off in different directions, not sticking to a single pulse but scattering wildly. After four frantic minutes of this, ‘Ouch (II)’ is for simultaneously catching breath and being weirded out by Kurstin's spacey, abrasive theremin explorations.

Being no Edwin Pouncey or Byron Coley, I'm ill-equipped to write a review that does genuine justice to what Ouch Evil Slow Hop achieves. Rochford and Kurstin are well-respected musicians; Rochford is a well-known, Mercury-nominated drummer who plays in experimental jazzists Polar Bear. A softly-spoken Scot with a massive, memorable afro, Rochford's drumming style is a skilled mash-up of influences ranging from jazz drummer Martin France to jumpy IDM chaos merchant Venetian Snares.

As for Kurstin, you can watch her on TED – there's an incredible video of her frozen-faced and locked in position, just manipulating her fingers a little in order to produce bizarre and tremulous sounds from her theremin, which, as she explains, is an instrument that 'makes you aware of every little thing your body is doing'. She plays neat, heart-rending songs that the TED audience applaud lavishly

With Rochford, she's doing something totally different. Prowling the depths of what the theremin can do, creating spaces in which to make primal lurches that last for minutes at a time, then mercilessly slicing through them with industrial-sounding fuzzes and wobbles. It's not my usual cup of tea, but it's pretty incredible. Good for rewiring a brain that's listened to a little too much Fleet Foxes lately, perhaps.

For lovers of straightforward melodic configurations, the album's centrepiece; the songs ‘Evil (I)’, ‘Evil (II)’ and ‘Evil (III)’, may hurt especially. Over the weekend, I played them to a friend just before we went to see Low perform at the Barbican. 'This isn't music,' he said, bewildered. An appropriate comment for someone who's in a Low frame of mind, and I can see where he's coming from. But the combination of Rochford's twitching, shimmering drumming and Kurstin's lugubrious oscillations has its own undeniable, fucked-up charm.

Album closer, ‘Hop’, is its stand-out, completing a progression upwards and outwards from the grimness of 'Evil'. While it's still another shape-shifting, weird mess, ‘Hop’ builds on the tiny doses of sweetness visible here and there in penultimate track ‘Slow’ and is the closest Rochford and Kurstin get to making something that sounds joyous. It's like crazed-out Deerhoof, and it's an absolute winner. Although it devolves too soon into a quieter outro, in its brief glimpse of euphoria, and in the stellar musicianship in evidence both on this album and elsewhere, it's clear that when they're jamming together Rochford and Kurstin can do anything – and they don't care whether you think it's nice or not.

The Pains Of Being Pure At Heart, Fanzine at Birmingham HMV Institute, , Tue 14 Jun