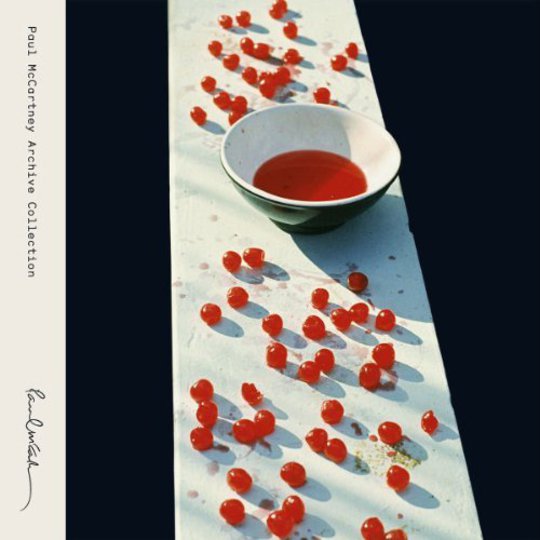 There are few solo careers penned with as many stencilled platitudes and spoken about in such poorly enunciated Chinese whispers as that of Paul McCartney. Weighted and measured alongside The Beatles, anything he produced was always going to be considered lightweight. Unlike his fellow bandmates however, McCartney has drawn a considerable and mostly unjust degree of flak over the years. And yet, in comparison to the myth, I have met precious few people who are genuinely able to discuss McCartney’s career in any degree of detail. They mutter something vaguely complimentary about Band on the Run. They snigger something about 'Frog Choruses'. They guffaw about vegetarian pies. And then they either shout “JET” in an annoying Alan Partridge affectation or slope off muttering John Lennon mantras while patting their army jacket and curling, mutton-chop sideburns. Getting a serious discussion about Paul McCartney’s solo career is one of the Holy Grails of musical conversation. It’s even harder than getting a serious debate about Ringo’s drumming. Or whether Bob Dylan could actually sing well (Quick Hint: the answers are 'Great' and 'Yes, he f**king well could').

Now don’t get me wrong, McCartney has, in his time, certainly been guilty of several horrendous musical crimes against humanity. ‘Ebony and Ivory’ is misdirected horror: reducing two icons to gormless, inconsequential cartoons. ‘Once Upon A Long Ago’ is so saccharine it makes me nauseous, giddy and dangerously hyperglycaemic. And ‘Spies Like Us’ frankly, makes you beg for a huge, target-shaped Off Button (Though I vehemently refuse to criticise ‘We All Stand Together’. Yes, it’s shit. But it’s a kid’s song for a kid’s movie. Take it in context, lighten up). But in truth, all of these come from a rather ill-considered period within the Eighties and he certainly wasn’t the only culprit (Bowie, Dylan and The Stones’ output over a similar period is equally as bad, if not worse). Though he’s proved largely irrelevant as a creative force over the last 30 years, McCartney’s work between 1970 and 1980, both during his weird DIY early solo period and a good spread of his work with Wings, is of a surprisingly high standard. The reissue of the two albums that bookend this period: McCartney (1970) and McCartney II (1980) portray an artist who was refreshingly prepared to rewrite and contort his musical persona. And while they certainly aren’t the best records of his career, their reissue offers an opportunity to reappraise a songwriter whose best solo work is oft overlooked in favour of the easily regurgitated stereotype.

Recorded in an assortment of home studios and Abbey Road as the towering beast of The Beatles finally stuttered, staggered and stumbled to a halt, McCartney is essentially an album of polished home demos: a patchwork quilt using assorted scraps of ideas that, though they occasionally run a little threadbare, still have enough texture and quality to be satisfying. It sounds like the carefree stream-of-consciousness of a man who simply wanted a safe place to relax and indulge his whims, but with his mind still partly tuned into the greatest songwriting duo of all time. As a result, McCartney is half wonderful, half self-indulgent, maddeningly unfinished. Even with the new remastering clearing a great deal of the murk off the original vocals and tightening up the instrumental balance (all played by McCartney himself), the whole thing still sounds deliberately lo-fi, though significantly less than the original mix.

The instrumentals are largely playful and enjoyable (except for the pointless 'Kreen-Akrore' which turgidly closes the album) but the real beauty is found in the lightly-sketched, sparse sweetness of the album’s ballads. ‘Junk’, originally written during The Beatles stay in India with the Maharishi, is haunted and utterly gorgeous. ‘Teddy Boy’ is sweet and soft and ‘Every Night’ is paced beautifully. But the entire album is overshadowed by the breathtaking, jaw-dropping brilliance of ‘Maybe I’m Amazed’; a love song of such magnificence that it stands up there with any post-Beatles track. McCartney’s singing has never sounded better and the whole thing soars with a subtle majesty and deftness of touch. The great regret is that McCartney didn’t offer it to George Martin or Phil Spector (yes, I know he hated him - but it would have worked) to overdub the track and tie up the loose ends: the remastering brightens the colours but still doesn’t fully clear the cobwebs. This under-reliance on production is a persistent irritation with his solo career; but when the songs are this good, they shine on through. McCartney is frequently self-centred and under-considered (almost deliberately so), but is still the sound of a songwriter who can blow away the opposition with consummate ease when he turns his mind to the task in hand. (7/10)

With a front cover appropriately showing his own face reflected in dual shadows, McCartney II is a distinctly fractured record. After drifting dangerously towards cliché and cornfields with Wings during the late Seventies, Paul eschewed soft stadium rock for a record that lurches one way and another, predominated by the synthesiser, which largely unknown in the mainstream at that time. And for the most part, it is excellent. Few would consider McCartney to be a pioneer of electronic music (and nor should they) but at the time of release, the album was distinctly ahead of its time for such a high-profile artist.

It starts with a disguised hand: the euphoric pop of 'Coming Up', before announcing its intentions with the ludicrous ‘Temporary Secretary’: arguably the most off-the-wall song of his entire career. Despite being draped with some utterly ridiculous and pointless lyrics (“She can be a belly dancer, I don’t need a true romancer / She can be a diplomat, but I don’t need a girl like that / She can be a neurosurgeon, if she’s doing nothing urgent”) it is a tongue-in-cheek nod to the future, with sharp staccato beats and twinkling, blinking, sparse LED samples. If you can avoid laughing at it, it’s bloody brilliant. The gravely, lo-fi blues of ‘On The Way’ and the asylum glam-stomp of ‘Bogey Music’ are curious, leering and frazzled, blended with the elegant Zen Garden minimalism of ‘Waterfalls’ (how TLC didn’t get sued is quite beyond me) and the pretty acoustic coda of ‘One Of These Days’. But where the album truly impresses is during the electronica, tumbling synth backdrops of ‘Frozen Jap’ and ‘Front Parlour’, which genuinely come close to Kraftwerk/Eno style ambience and atmospherics. Only during the tumbling barnyard nonsense of ‘Nobody Knows’ does the album truly come unstuck; but for the most part, McCartney II is impressive and bold. Again, it suffers from a lack of refined edges but there is something distinctly charming and surprisingly forthright about the way the record is presented and delivered. It isn’t always great but for the most part, it stands up surprisingly well. (8/10)

Featured on each album is a CD of live and demo tracks with a separate DVD alongside. It’s fair to say that to most non-obsessives, there’s little on them that will genuinely excite (an instrumental, identical version of ‘Oo You’ is hardly going to spark a tickertape parade). But there are some highlights, including a stunning live performance of ‘Maybe I’m Amazed’ and the bizarre, saloon-piano croon of ‘Suicide’. McCartney II is far better on the audio front, including a razor sharp and raw ‘Coming Up’ live at Glasgow and best of all, ‘Blue Wave’: a dazzling, dipping collaboration with Richard Niles and his orchestra that is quite stunning in concept and execution. ‘Secret Friend’ and the bizarre ‘Mr H Atom’ are also impressive, but there is simply no excuse for slapping the atrocious ‘Wonderful Christmastime’ on the CD. It is bad enough hearing it during the festive period. Listening to it in June is almost enough to induce fantasies of apocalyptic bloody vengeance. The DVDs are a similar bag of mixed gifts. Hearing McCartney reflect on the first record is sweet, but he doesn’t really say anything too revealing, it’s more of an excuse for nostalgia and some pretty animation montages (though the family pictures from the first record do suggest McCartney has a deep spiritual bond with his debut). The second DVD is far better, containing a fascinating interview with Tim Rice where he discusses the reasons for using synthesiser and production on the record, coming across as a true audiophile and genuinely prepared to fight his corner. The videos on each DVD are curiously chosen and add little however (though there is comic relief with the toe-curling promos for ‘Coming Up’ and ‘Waterfalls’: so hysterically awful that watching them is enough to make you instantly appreciate why MTV was so vital). Oh, and if you’re not satiated, there’s the mawkish video for ‘Wonderful Christmastime’. Which if you make it fully through, you’re a more balanced individual than I am…

Paul McCartney certainly released better solo albums than these (1971’s excellent Ram remains his high-water mark in my opinion) but the dual re-release makes a lot of sense. It shows a man who, far away from the twee, one-dimensional hit-maker of many people’s eyes, was actually prepared to try new things without being too concerned by trends, tastes and chart positions. That’s brave, and though it may not always have worked like clockwork; McCartney deserves retrospective praise for trying something different. He’s an easy character to criticise due to his smugness and penchant for embarrassing words and actions; but musically, he’s far more aware, far more talented than many give him credit for. The most important thing about the re-release of McCartney and McCartney II is that they show that though Paul McCartney wasn’t always perfect, there is a sizeable element of his solo career that boldly displays the one word that many people don’t think of when they hear his name. And that word is “Interesting”. McCartney is an odd beast, a character who is likeable, loveable and utterly cringe-inducing at the same time (and often within the same song. But his solo career does carry a weight and depth beyond the measure of many critical and public opinions. These two records are a reminder that though he might not always have had the firmest grip on quality control during his solo career, when he got it right, he could still conjure up moments of brilliance. There’s far more to Paul McCartney than you see on first glance; he just doesn’t always make it easy for you to see through the Magic Eye illusion that covers so much of his post Beatles career.