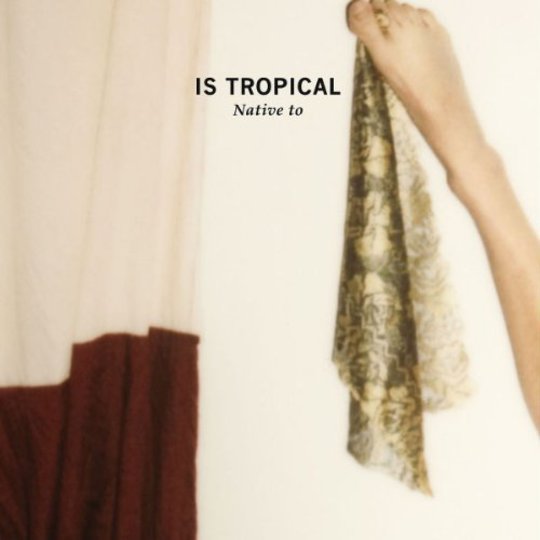 This time last year Is Tropical were hot property. In fact scrap that. Rewind to the end of 2009 and even then the mysterious, mask-wearing London trio were starting to carve out a presence on the blogosphere.

But fast forward to mid-2011 and the hype has quietened down, despite a steady stream of tracks having been released onto the web. In fact, given the buzz surrounding the band last year and considering how much of their music is already available online, it seems odd indeed that the band have waited until now to release their debut proper.

Is Tropical's early success can probably be attributed to the fact that the spewing basslines of first single ‘When O When’/ ‘Seaside Mutiny’ basically picked up sonically where Myths of the Near Future left off. It seemed at the time like they were riding on the coat tails of Klaxons' day-glo pop fusions.

Thankfully, then, the necessary tweaks have been made. On Native To the only time the band sound anything remotely like Klaxons is on the aforementioned ‘Seaside Mutiny’. And even then, despite its obvious musical influences (not to mention to early Nineties Nintendo games) it still kicks like a motherfucker.

Instead, the band have added darker yet strangely more euphoric nuances to their music; new single ‘The Greeks’ seeming to be the most obvious talking point. Accompanied by an awesome, viral-hit of a video that involves kids dealing drugs and play-killing each other with the help of some uncompromisingly gory cartoon animation, the song itself almost runs the risk of being overshadowed. But with jangling stabs of Balearic synth, Metronomy bass licks and an almost Ian Brown-esque vocal (“you only get what you give away”), it’s easily one of the best tracks on the album. ‘South Pacific’ could rival it though, with sunbaked, echoing chimes and blissed-out dream pop smeared atop smudged guitar fuzz. Then you’ve got ‘Lies’, which despite nagging inclinations to spill over into Calvin Harris territory, also employs some throbbing Justice-like crunches and textures not to mention a melody as high and airy as the blue, fluffy, cloud dotted sky imagery it evokes.

Sadly that’s where the standouts end. With each track segueing seamlessly into each other, there’s no doubt Is Tropical intended this album to soundtrack parties. But sometimes the changes between songs are so languid you can barely tell its taken place.

‘What???’ and ‘Clouds’ purvey the same swooning-vaporous delirium, only the latter possesses an irritating child-like riff that could soundtrack a Carebear Stare and should be eradicated immediately. Meanwhile a few of the remaining tracks would have benefitted massively from the Late of the Pier synth-lashing approach used on ‘South Pacific’ B-side ‘Tan Man’. Incidentally, while we’re on the subject it’s fair to say that track would have been a far more interesting inclusion than, say, the previously released ‘I’ll Take My Chances’ with its forgettable, paper-thin melody.

But the real rub lies here. The majority of Native To’s best moments have been available to download for free for a while – ‘The Greeks’ since April, ‘South Pacific’ since November, ‘Seaside Mutiny’ since January 2010. And with the best of the bunch already out there, the rest simply feels disposable by comparison. You can’t help feeling Is Tropical may have made a mistake by playing their aces too early. Lucky they’ve got that video then.

The Wages of Fear