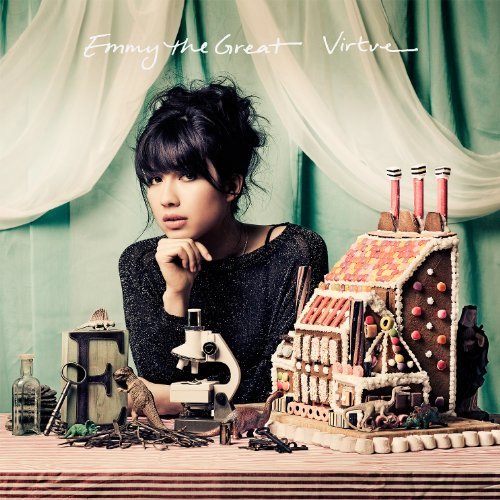 Virtue is every bit as lovely as First Love but has a greater sophistication in arrangements and mixes.»

two years after her critically acclaimed debut 'first love', emmy the great releases her second album 'virtue'. written and recorded under very different circumstances to her first, 'virtue' began as a series of stories emmy embarked on after her engagement to an atheist, but took on a very different shape when he left her for the church. using symbols borrowed from fairy tales and mythology, emmy added the icons that have replaced them in our modern consciousness - industrial buildings, mushroom clouds, west london's trellick tower. this was emmy's personal collection of myths that she fitted to her music - a genre she refers to as digital medieval. she'd noticed that women only make it through the woods in big myths if they keep their virtue and she felt lost in the woods twice while writing the album, first when she got engaged, the second time when the stitches came apart. when her fiance left, emmy had to pick up the pieces. she hid in the country, lost herself in books about saints, archetypes, and folk tales, trying to make the world work. but she didn't want the album to be about her. it had to save her from what had happened, but be about everything. 'virtue' was made in london and sussex. this time round, euan hinshelwood, her long-term musical collaborator, and emmy took the reins, rather than develop the songs with their full band in the studio. euan came up with the guitar palette, strange, ambient, twisted and atmospheric, while emmy wrote backing vocals for different characters she voiced herself. the ghosts of the cocteau twins and suzanne vega feature, as well as the stories of margaret atwood and angela carter, and the writing of cultural theorists like marina warner. emmy wanted a cast for this album, to lift up the world she was trying to conjure, and kept albums in mind that have similar ambitions - neutral milk hotel's 'in the aeroplane over the sea'; janelle monae's 'the archandroid'. while making it, she listened to girly pop like the bangles, tempered with religious choirs, folk from the south pacific, while euan became obsessed with post-punk and bulgarian choirs. they even spent a night googling enya.
producer gareth jones (these new puritans, depeche mode and grizzly bear) indulged their romanticism, but understood their wish to make the music sound precise, rather than precious. emmy also knew she had to let go - to confront things without fear, to throw her head high, say what she thought, things she couldn't say to herself without music. it's this record, she says, that's made her feel like a person and that she hopes will speak to others who've endured and survived.
description from www.roughtrade.com