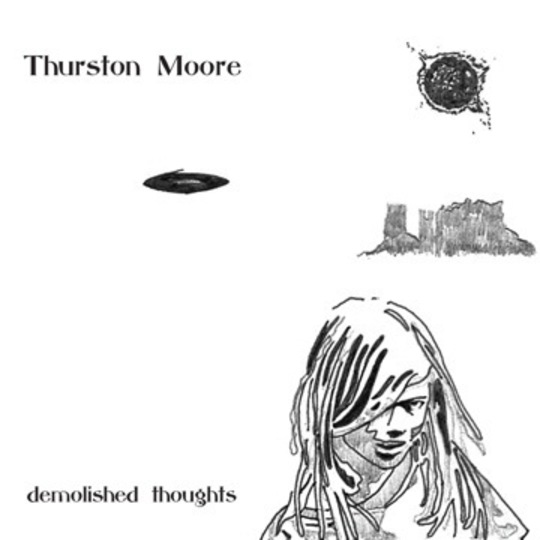 It would take a committed contrarian to argue that Thurston Moore’s output is not prolific. His record label, critics and public seem entirely unsure as to how many of the slew of releases he’s stuck out over the years should count as solo albums. A serial collaborator, even when on sabbatical from that big rock band he plays in, we can at least say that Demolished Thoughts is the third song-based collection to come out under Moore’s own name. As a trio, the three records can be seen as a sonic journey: from the heady electric brew of 1995’s Psychic Hearts, through 2007’s Trees Outside The Academy, which switched between electric and acoustic guitars, to this effort, on which our lanky guitar hero sticks unswervingly to his steel-stringed acoustics.

So although its name is cribbed from a lyric by Washington hardcore act The Faith that Moore previously utilised as the handle of an all star punk covers band in which he featured (alongside J Mascis, Awesome Color’s Allison Busch, Fucked Up’s Jonah Falco and Gumball’s Don Fleming) for a one-off performance at last year’s SXSW, Demolished Thoughts’ explorations take Moore as far from his punk roots as he has yet travelled, towards some pastoral folk hinterland.

A glib appraisal of his solo career’s three-staged shift from electric to acoustic might gauge that this trip marks the now 52-year-old Moore’s aging process; a move in his case away both from youth and from the ‘Youth. That would be to ignore the commitment to electric improvisation pocked across that aforementioned slew, the continued rollicking form of Sonic Youth, and the actuality of the nine songs collected on this LP. For while the precisely picked and strummed acoustic lines are backed violin and harp, old habits die hard, and Moore’s persistence with unconventional tunings and extended guitar techniques has produced songwriting is recognisably his own.

‘Circulation’ pits an unending guitar strum against flecked violin patterns and the occasional explosions of colour, with Moore’s hushed threatening vocal producing a claustrophobic atmosphere. ‘Mina Loy’ both opens with a tense solo guitar exploration which is wound ever tighter as various instruments enter the fray one after the other before the addition a finely wrought sorrowful lyric. These are intense songs, and Moore has been quick to credit his producer, one Beck Hansen, with sharpening them up. His taut arrangements stretch the form and draw out the essence of each track.

The beautiful ‘Benediction’ - a graceful love song that could be a companion piece to Trees Outside the Academy’s marvellous ‘Honest James’ - is etched with ethereal washes of harp and a careworn string section and eventually sidles off with some lightly brushed drumwork. The lush lines of bowed stings punctuating ‘Blood Never Lies’ and ‘January’ pointedly hark back to Robert Kirby’s flowing arrangements for Nick Drake, but elsewhere on the album, as on ‘Illumine’, precise, plucked violin and harp hold songs for moments of cryogenic stasis. ‘Orchard Street'’s cession from warm memorial to a Branca-like slurry of chord repetitions is carefully orchestrated to end with Moore’s lone guitar picked under the bridge, which in turn segues back into the warm wonderings of ‘In Silver Rain With a Paper Key’.

Thirty years in arguably the most significant act to come out of the American alternative underground of the Eighties has clearly not dimmed Moore’s desire to explore new territory, and this record is as much testament to that as any of his many others.