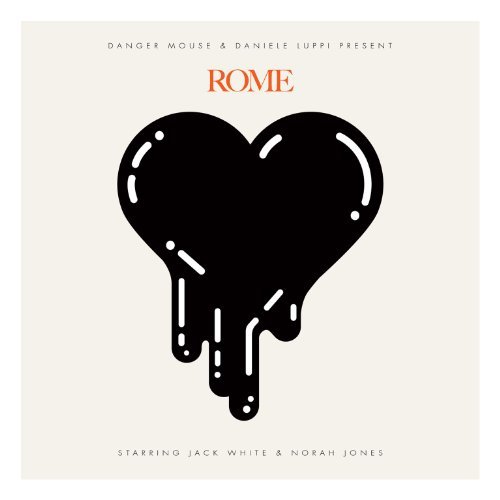 one of the albums in 2011 you need to hear from danger mouse and daniele luppi featuring jack white and norah jones. some five years in the making, the conception of 'rome' actually dates back even further, to the 2004 meeting of brian burton aka danger mouse and italian composer / arranger daniele luppi. burton was emerging from the aftermath of the media storm around his 'grey album' and beginning work on gorillaz now multi-platinum and grammy winning 'demon days'. luppi was amassing acclaim for his album an italian story, which paid tribute to the cinematic sounds that shaped his childhood, while writing music for the screen (sex in the city, nine, etc.) and soon thereafter contributing arrangements to burton projects including gnarls barkley, dark night of the soul and broken bells. united in their shared passion for classic italian film music, burton and luppi have created a record like no other: intense songwriting periods both together and apart and travels to rome during which luppi reunited for the first time in decades original musicians from the scores of 'the good, the bad and the ugly' and 'once upon a time in the west' including the legendary marc 4 backing band and alessandro alessandroni's 'i cantori moderni' choir laid the groundwork. recording took place in rome's cavernous forum studios formerly ortophonic studios, founded, amongst others, by the great ennio morricone - employing vintage equipment, for which burton and luppi would pay with bottles of wine, and making every effort to replicate the recording practices of the 1960s / 70s golden age, recording live to tape, with no electronics, computers or 21st-century effects. crucial to the completion of rome has been the enlistment of two lead vocalists who not only do justice to but complete the three songs each written for a man and a woman. while on tour with gnarls barkley, burton met jack white and a year later, white recorded his contributions the rose with the broken neck, two against one and the world in nashville. white s counterpart, in a revelatory turn, is norah jones, who flew to burton's la studio from new york to sing on 'season's trees', 'black' and 'problem queen'.
description from www.roughtrade.com