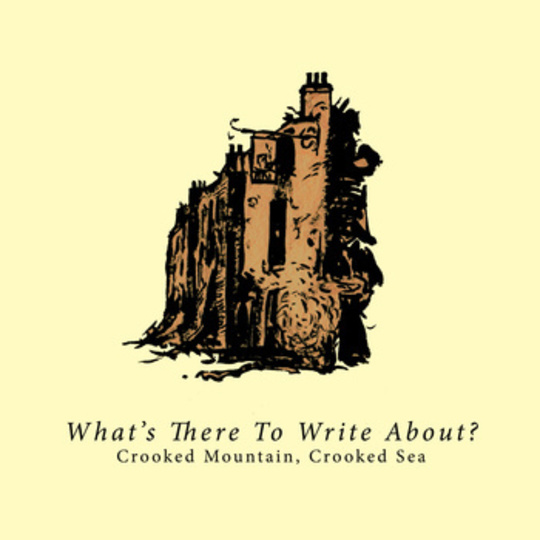 With an album title that positively begs for some sort of comical quip as an answer to its no-doubt-intended-as-rhetorical questioning, What’s There To Write About? is the mark of a self-consciously rebellious band with a wry sense of humour. In this case, the sculptors of such sounds and abstract musings fall within the ranks of Brighton-based rockers Crooked Mountain, Crooked Sea and this, their raucous début.

First impressions of What’s There To Write About? point to myriad post-hardcore influences: the concise 27-minute duration, a lo-fi production and frontman Andy Brothwell’s early Ian MacKaye-alike vocals all recall past masters Fugazi and Minor Threat, as well as At The Drive-In’s updated take on the scene. Still, to shoehorn Crooked Mountain, Crooked Sea into a strict genre classification is to ignore the compositional aspects that make the band such an enticing prospect.

Opener ‘Faults’ is angular and almost math-rock in style before an explosive chorus kicks in with a frustrated fury, made all the more intense by a segue back into clean guitar picking. Indeed, the contrastive rhythms and dynamics that dominate throughout ensure that the album’s ten tracks are each different enough to avoid repetition but without sacrificing cohesion. Further, one of the crucial factors in cementing the album’s character lies in its recording: What’s There To Write About? is, in fact, a collection of predominantly live performances, committed to hard drive in a converted stable.

However, while a gritty, dirty sound may suit that of their primary forebears, it fails to provide an accurate portrayal of Crooked Mountain, Crooked Sea’s lighter, more delicate side and thus proves to be a cutting, but ultimately double-edged, sword; guitars are undefined, lyrics indistinguishable and basslines lack impact. This approach stands resolutely proud as a 'fuck you' to modern, polished production standards but at the same time establishes itself as detrimental to the album’s overall vision.

Take ‘Chances Scattered’: a beautifully understated chord progression is combined with softly-spoken, tentative vocals, resulting in a track that wouldn’t sound out of place on an early Mogwai recording. However, in sharing the same production characteristics as the rest of the album, it is left underdeveloped and overlooked. Similarly, the Cursive-esque breakdowns scattered across the likes of ‘Plans’ fall flat in comparison to the song’s otherwise angst-fuelled exterior.

Nevertheless, What’s There To Write About? proceeds at a breakneck pace, the subdued co-existing with the hardcore but never breaking the ever-present tension which proliferates throughout Crooked Mountain, Crooked Sea’s debut. Although none of the album’s ten tracks break the three-and-a-half-minute barrier, they are by no means lacking in progression; ‘Second Guessing From An Armchair’ goes through a variety of movements, fusing suspended chords with start-stop shouty bits, while ‘Other Places, Other People’ rises and falls with a punishingly elegant grace. The band cite Nirvana as an influence, although the loud-quiet dynamics popularised in the early Nineties are subjected to far more extreme contrasts here, best demonstrated in the doom-laden, and obscurely-named, closer ‘Graces Think Pit’.

Crooked Mountain, Crooked Sea have a lot to be proud of here; What’s There To Write About takes post-hardcore across some relatively unexplored dynamic paths that defy the album’s diminutive duration. However, the lo-fi production prevents the band from fully exploring and exploiting their varied influences and instead enforces an explicitly traditional hardcore sound, an approach which does not truly do this release justice. Still, this could be exactly what Crooked Mountain, Crooked Sea intended: to give us something to write about.