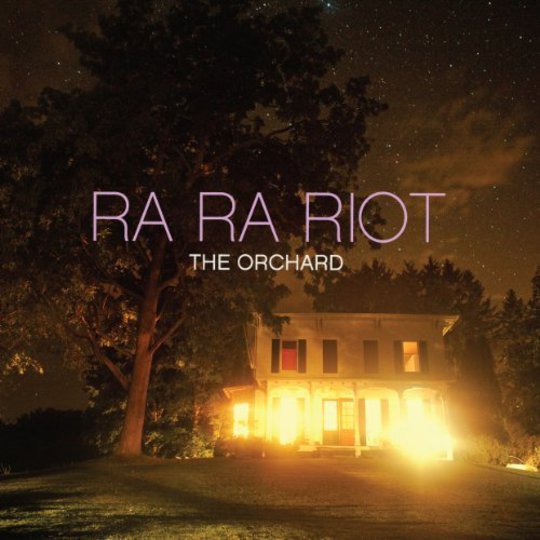 And it all started so well. Ra Ra Riot's second record conveniently mirrors their career to date. There's so much promise here. But something seems to have veered from the right path, slightly. Regularly compared to Vampire Weekend - which gives the band added exposure but also places them in a pretty frightening shadow - Ra Ra Riot are obviously keen to pitch their picnic blankets on the campus knoll with a greater sense of conviction. _The Orchard_ is really an attempt to do just that, to communicate a little more like the older, more life-worn George Falconer and a little less like the rosy-cheeked Kenny Potter, whose wayward emotions were the same sort of emotions that permeated the band's generally impressive debut, The Rhumb Line.

At risk of bringing their vampiric cousins into this particular equation too much, the things that separated the bands back then separate them even more now. If Vampire Weekend are seemingly adept at and quite happy highlighting the eccentricity and social foibles of the middle-upper gentry, Ra Ra Riot are more comfortable translating more well-trodden foundations of songwriting, namely heartbreak, unexplainable bouts of sadness, and fear and anxiety. But it is this lugubriousness that got people rightly excited about Ra Ra Riot in the first place. It gave their first album improbable depth and heart (for a band with a sounds-like-VW tag) and presented one or two more faces than Ezra did with his his fixated, and rightly self-contented smirk.

Sadly for the Syracuse, NY band, their preference for solemnity doesn't always translate quite as effectively here as it did with their debut. Which is surprising, as with innocence shed, and with the songs taking on greater musical and emotional complexity and texture there is more actual substance here. Perhaps it's merely an illustration of how great they are at producing tight, high-calibre indie-pop tracks and how these tracks expose the weaknesses of the others. Both 'Boy' and 'Too Dramatic' are as close to intravenous pop as you can get. They're likely to make pretty much anyone smile and dance around a bit, something that actually feels quite refreshing given the recent dearth of decent, straightforward indie-pop.

But in contrast, tracks like 'Do You Remember' and 'You And I Know' drift a little too uncomfortably, especially lyrically, without any real sense that they'll offer anything more with time. Some of The Orchard is really only worth visiting once and even then you'll be looking at your watch or thinking about the coffee and cakes being served up in the nearby country café. Other tracks such as the worryingly half-hearted 'Kansai' just sound a bit like crap Fleetwood Mac. The song's shorthand attempts at mysticism - "_There's something else / I thought about / the universe / when it's merciful_" - may make for sweet poetry, but the attachment of these lyrics to meaningful melodies falters. This is a band that can do so much better than this.

Besides the pop successes and rank disappointments, The Orchard is still curious and pretty enough to be worth exploring. The opening title track is particularly strong. As a single piece, it seems to sonify the aim of the majority of the record. Musically complex and with no real chorus, it's really more a beguiling platform for Wes Miles' delicate vocal charms, but it's also a place where this band can experiment and find their true selves. The same can be said of the sweetly meandering love of 'Foolish' and addictive vocal harmonics of 'Massachusetts'. Closing track, 'Keep It Quiet' ends the record in the same promising vein that it began. Stopping short of outright pop and heading in a direction that has yet to fully materialise, let's hope things eventually progress for Ra Ra Riot as well as they started.