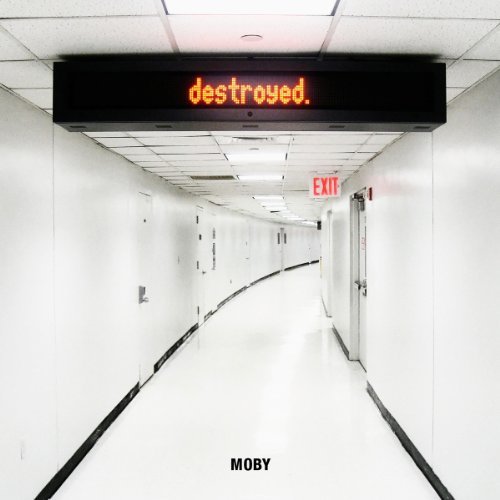 Moby appears caught between two worlds, the celebrity hit-maker and the authentic artist, failing to bridge from one to the other.»

'destroyed' is a behind-the-scenes international odyssey with moby, introducing us to a side of touring that is often unexposed; secluded time spent in artificial spaces like hotel rooms, airports, and backstage waiting areas. the album and photo book combination provides an intimate look at moby's world and his creative process as an artist, both the music and photos were created in the same period and draw inspiration from the strange and sublime world of touring. moby's songs from 'destroyed' were written late at night in hotel rooms around the world. a soundtrack for empty cities at 2am, 'destroyed' evokes nocturnal feelings of both anxious isolation and the comfort of quiet solitude. the result is a 15-track collection that conflates the atmospheric and the disconcerting with the enveloping and beautiful - a record rich in the kind of melodies that are lodged in the brain by stealth rather than with a bludgeon.
produced by moby and mixed by ken thomas (who has worked with everyone from david bowie and queen to sigur ros and m83), 'destroyed' was recorded using vintage analog equipment and mixed on a 1972 neve mixing desk from abbey road. a cohesive body of work, 'destroyed' is best experienced in its entirety and late at night when the city has gone to sleep.
description from www.roughtrade.com