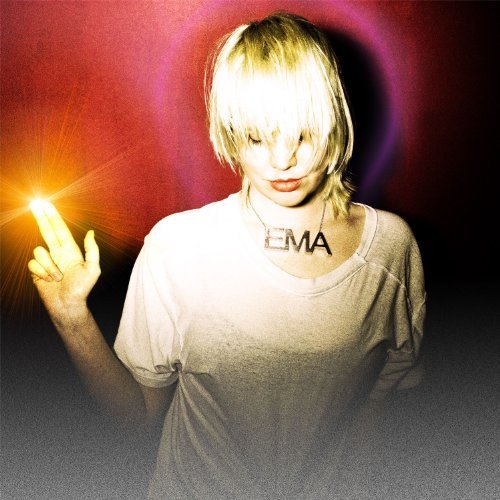 Not easy, but often fascinating, wholly rewarding and genuinely cathartic.»

having introduced herself as a solo artist with the epically rocking seven minute single 'grey ship' backed with a slowly rambunctious and flailing seventeen minute cover of the robert johnson blues staple, 'kind heart', ema invites you deeper into her world with her debut album, 'past life martyred saints'. fans of guitar noise will have crossed paths with ema as the scorching guitarist in legendary folk / noise outfit amps for christ before forming the genre-defying cult duo gowns with ezra buchla. their 2007 album 'red state' was an electronic folk and feedback drenched masterpiece that left critics both raving and bewildered. it sadly proved to be their last. the upside is that that musical crossroads lead to the unveiling of ema who has since opened for throbbing gr istle on their last us tour. did we also mention she relocated to la when she was just 18, because she really liked 'welcome to the jungle' ballsy? erm, just a tad. if there is a grand unifying theory behind 'past life martyred saints', it's that ema treats fidelity and distortion like another instrument, being obsessed with the question of analogue vs digital. songs switch seamlessly between lo-fi 4 track grunge, trashy dance beats and damaged girl group ballads, like all the car radio hits of the past fifty years absorbed and sweated out through pores of distortion, feedback and reverence. evoking the whisper-to-yell dynamics of early cat power but without the oft-copied melancholy, liz phair's intimate and visceral expression or royal trux emerging from a basement fug and smelling fresh salty air for the first time, she is a significant talent that completely compels the listener. ema's songs are filled with harmonies and hooks that exist right in those sweet spots between melody and dissonance. it is a knowing voice, the sound of a drunken laugh while crying.
description from www.roughtrade.com