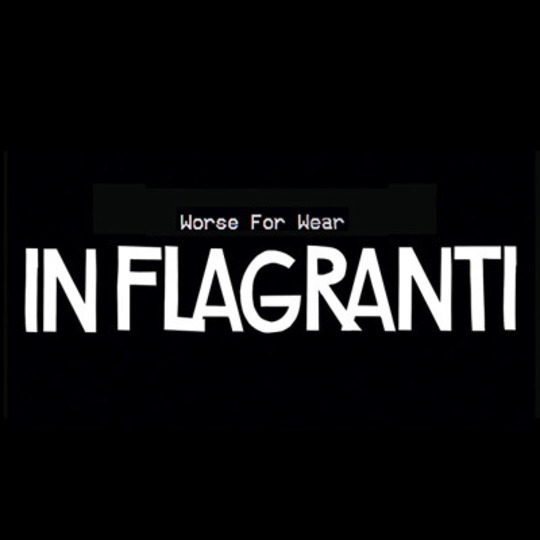 Have you visited the digital mausoleum that is MySpace UK recently? I’m on its homepage now, trudging through the wreckage, lost in a garish dystopia where every click blows-up your laptop in a landmine of random content. [BOOOM] Featured Artist Morning Parade’s Tour-Diary Webisode Catch-up [POWWW] Fan Payback: Win Tickets + Exclusive Meet/Greet livestream w/N-Dubz @ 02 Arena.

It’s like some cosmological entity that’s expanded to breaking-point only to implode in a shower of debris. After repelling ten million users in a month its updated logo now best represents the site’s pulse on a heart-rate monitor. For an act like In Flagranti, this can only be a good thing.

You see, since the release of Wronger Than Anyone Else back in 2006, In Flagranti have busied themselves making the sort of warped, unsanitary, mutant-disco that would have MySpace street-teamers reaching for the Dettol. They’re the musical equivalent of a £2.99 bottle of Lidl Grand Reserva; glorious in their vulgarity, slightly depraved yet utterly intoxicating. Whether it’s their pornographic artwork or the grammatically incorrect song-titles, In Flagranti are as exhilarating as they are unmarketable. So as MySpace slowly dies whilst vinyl sales resuscitate, there’s no better time for the near-anonymous production duo to launch their triumphant third record Worse For Wear.

If you’ve yet to sample the band’s musical delights (and judging by their impossibly modest last.fm stats, few have) then I urge you to try ‘Latter Day Methods’ on for size. Upon hearing it for the first time I leapt from my chair with joy, splurged it all over the music board as song of the year (0 Replies)and fired the MP3 off to friends’ work emails with a big red priority flag on it. Like all their best songs it’s a rambunctious jumble of delirious synths and warped beats, seconds away from collapsing to the floor in a drunken heap at any moment. I can’t tell you how happy it makes me feel. Elsewhere check out ‘Hollow Discourse’ with its ridiculous bassline and barely in-time samples, it’s more DIY-centric than a mid-Nineties Tim Allen stand-up routine and all the more fantastic for it.

The first time I took 2009 album Brash and Vulgar out for a stroll with me I assumed I’d accidentally put my iPod on shuffle because the album flipped from squelching-house through to cosmic-disco and then onto mischievous bouncy post-punk girl-pop in the form of ‘Pick A Trick’ (http://www.youtube.com/watch?v=0FHJtHz4wJE). Similarly the mixtape-aesthetic on Worse For Wear makes me feel like a child waking up on Christmas morning to find a stocking rammed with treats at the foot of the bed. Dig through their sonic-scrapyard and you’ll find languorous Italo-lounge (‘Three Piece Suit’) rubbing shoulders with slinking claustrophobic-euphoria (‘Worse For Wear.’) This splendid array is only dampened by the fact that the playful female vocals which so elegantly punctuated the last album are absent this time round.

Whilst the digital explosion may avert the eyes, the real pulse-racing thrills spring from the fallout. In Flagranti offer no hype, no glory, no backstory, no limited edition MP3 dongle for the first 500 customers. What they do offer is a jolt to the system, a record bursting with spontaneity that thrills and delights in equal measure. Superb stuff.