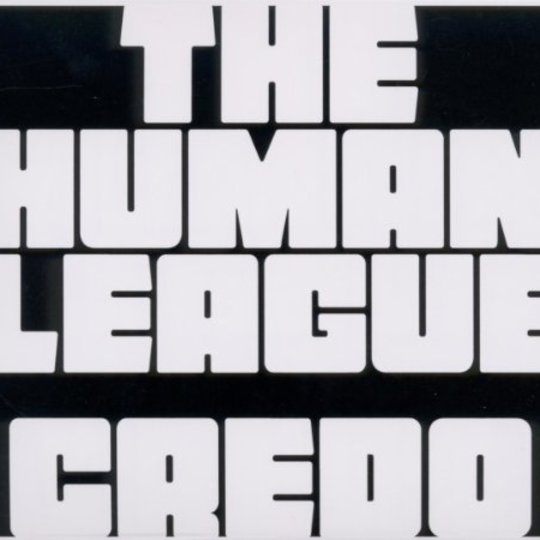 If a 'Credo' is a statement of belief, then Credo is The Human League's statement of belief that the sounds they honed to perfection in their late-Seventies to early-Eighties heyday are tools of timeless utility. Phil Oakey has gone as far to say that certain tracks, such as 'Privilege' are “...fixed in 1978.” Truth be told, Credo's sound falls somewhere between the black hit of space of their first two records and Dare's rouge cheeked synth-pop; it's more muscular certainly and with a glossy modern sheen (courtesy of fellow Sheffielders I Monster), but essentially it sounds like The Human League, or at least what you would expect a Human League record in 2011 to sound like. They are, as Oakey sings himself, 'Single Minded'.

That song rounds up a pretty satisfying first half to Credo and it makes the most of The Human League's sonic palette, with rich analogue synthesizers variably buzzing, babbling and chirping away with percussion (all synthetic of course) playing ping-pong across the stereo field. Aside from the wholy unexpected, and off-kilter, key-change for the the chorus, the song is somewhat reminiscent of LCD Soundsystem's 'I Can Change', a song which always reminded me of The Human League to begin with. Album opener 'Never Let Me Go' is the one substantial nod to contemporary pop production in the form of an auto-tuned lead vocal from Susan Sulley, which is a shame for the obvious reason that the vocal modesty of Sulley and Joanne Catherall was an essential and endearing aspect of The Human League Mk.II. The song itself retains plenty of charm nonetheless, with Oakey and Catherall providing the equally robotic backing vocals amidst crisp beats and sprays of foamy synth. 'Night People' takes the same elements, but augmented with an industrial-force beat and house-style bass. If its foreboding nocturnal feel wants for some of the gleeful warmth of Dare this is mitigated by the comparatively tame lyrics which possess a grammar-defying quaintness: “Gather up your skirts and trouser/Put on your best frocks and blouses/Time to go out from your houses/Must we creep round like the mouses”.

For the record's first half the trio aren't short on melody. 'Egomaniac' starts with the grating echo of Oakey exclaiming the songtitle, but it's all quite thrilling once enveloped within the urgently ascending bass scales and gauzy panes of synth. However, the standout track is the one where they sound most comfortably like themselves, the lost-love ballad 'Sky'. There's a clear separation of texture and weight in the song; the low-end is dominated by the wobbly synth-bass, the high-end by the trickle of thin metallic liquidity and the mid-range filled out by the vocals, with the beats claiming a stake in each part.

Unfortunately, as far as memorable melodies are concerned, side two is rather a barren affair. 'Electric Shock' is all taut electro muscularity, like the preceding 'Night People', but without the hooks. The pre-chorus of 'Get Together' excites only for the chorus to disappoint with stunted melody. The aforementioned, “stuck in 1978”, 'Privilege' is lyrically clumsy, but does indeed provide intriguing insight into what the group's earliest incarnation might have sounded like with the Sulley and Catherall on backing vocals, although it's Oakey's moody incantation of the title which dominates. Closing track 'When the Stars Start To Shine' is also crude, but enjoyable nonetheless thanks to the marriage of electro-punk beats and the celestial vocal harmonies.

Stating that a once pioneering group essentially sound like a little-changed version of themselves from 20 years ago, without reaching those heights, might seem like extremely faint praise. However, given the embarrassing attempts of The Human League's contemporaries, such as OMD and Gary Numan, to update their music in recent year, it's heartening to hear them still getting some artistic mileage out of their old formula. It's unlikely to change anybody's opinion of them, but Credo at very least provides a five or six songs which would actually be a pleasure to here next to the classics.