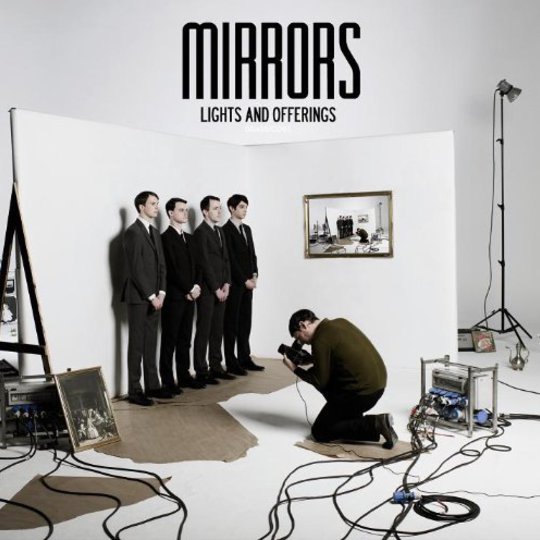 The flagrant musical plundering and appropriation of the Eighties, in particular one aspect of it - synthpop - has become as shameless as the era itself. But just when you thought there couldn't possibly be any more life left to in that perennial, seemingly inexhaustible revival, up rise Brighton’s Mirrors from the ashes of twee-poppers Mumm-Ra (remember them?), armed this time with cold, glacial electro and a penchant for Kraftwerk-esque suits.

And this time they couldn’t be further away from cutesy hooks and scruffy, student hair. Before even a note was played, the band spent time discussing, then diligently preparing an image that reflected their idea of the consummate band, taking in clothing and onstage visuals, then fitting the music around it.

This perfectionism permeates every aspect of Mirrors’ existence, palpable in the fitted suits, the skinny ties, the slicked wet-look hair - the look is arty, monochrome, disciplined, immaculate. Fellow Eighties-raiders Hurts dress like Bros but Mirrors look like investment bankers, or charitably, like they’re posing on the cover of Trans Europe Express.

But what of the music? Vocalist James New has remarked that Lights and Offerings was in direct response to the desire to “build something from the ground up and create something entirely different.” But though their collection of precise, self-titled 'pop noir' is, for the most part, an impressive first effort, derivativeness lies at its core. Depeche Mode, OMD, New Order, the aforementioned Kraftwerk, even Cabaret Voltaire are all obvious reference points. But pillaging from the back catalogues of Eighties electronica is an institutionalised practice today, and Mirrors do it with such style and elegance it renders their less than original sound irrelevant.

Opener ‘Fear of Drowning’ has a twinkling refrain that remains lodged in your cranium like the imprint of fireworks frazzling your retinas. Giving way to a lush, brooding pulse and ambience it bubbles along, always understated, never spilling over, before ebbing away.

Recent single ‘Into the Heart’ provides the first standout moment. Crisp and efficient it conjures fragments of blinding white lights smoothed down to a slick finish, the vibe echoing Violator or OMD’s Operation. “Now we dance where the light drained our heaviest hearts, come meet me in the dark” New sighs almost emo-ishly, displaying why Mirrors have garnered a tag as the poignant souls who inhibit the dark corners of the dance floor.

From here on the hooks come thick and fast. There’s the measured, cool beauty of ‘Write Through the Night’ and carefully controlled euphoria of ‘Ways To An End.’ The agitated, harder beat of ‘Searching In the Wilderness’ and LCD-aping breeze of ‘Something Strange.’

Clearly they have the tunes, they have the vision. But while in a heady moment underneath the disco ball it would be easy to fall in love with Mirrors, there remains something clinical and emotionally cold about the whole operation. For instance, the press release for second single, ‘Look At Me’ contained details of their modus vivendi: 'Mirrors follow the straightest of lines, Mirrors are attentive to minutiae. Mirrors are Black and /or White'. You can’t help feeling that they spent so long getting everything right that they forgot to inject their project with some vulnerability, some humanity.

New has commented that the band live by the moniker ‘art is life’. And maybe it’s this obsession to live what they make that makes them so difficult to connect to on a regular level. Or maybe it’s their live show, which for all its eye-melting visuals, is devoid of warmth – the band performing in a perfect line, eyes often fixated forwards with almost deadpan indifference. They might be brilliant at what they do but at the centre of Lights and Offerings thrums a glass heart.