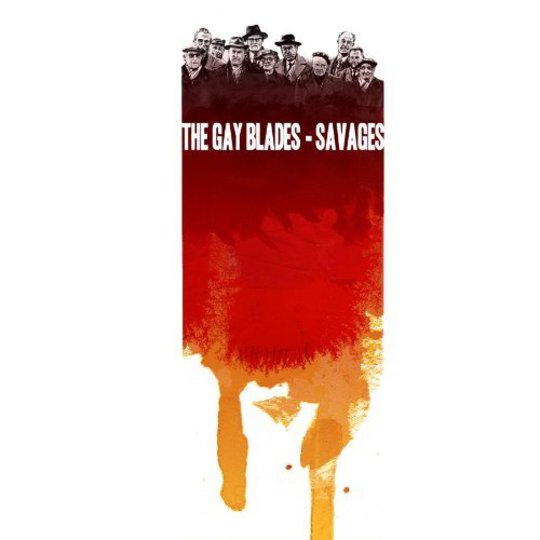 The personae The Gay Blades have fashioned for themselves in the press gives the impression of a couple of tongue-in-cheek agents of rock n' roll irony and masters of 'showmanship', if reports from SXSW be believed. Somehow this fails to materialise on their second album, Savages, a record of blandly earnest indie-anthems punctuated with tokenistic ecleticism and fleeting moments of genuinely memorable melody.

'Mick Jagger' is a notable exception, possessing brazen guitar licks and funky bass which gives the rhythm section a preening strut worthy of the track's namesake, while Mike Abiuso's organ backing adds some textural density, without taking away from the exclamatory playing of Westfield and drummer 'Puppy Mills'. It's not entirely clear whether Jagger is the the actual subject in lyrics such as “You got old, you got cold, you don't care any more, your heart went through the floor and just shattered.” 'Try To Understand' is another standout (in stylistic terms at least) arriving on a fanfare of bullish brass and a Motown rhythm section fleshed out with jangly acoustic guitar, reminiscent of Ga Ga Ga Ga Ga-era Spoon minus the experimental flourishes and with a melody that almost recalls Katrina and the Waves. This and cloying lyrical sentiments (“Now darling go and try to make up with your mama/Pick up your phone and call yourself your papa”) aside, it's an undeniably infectious foot-tapper. 'November Fight Song' is effectively a toned down version of 'Try To Understand' sans brass section, but with the addition of piano, which, while providing a pretty key change in the chorus, could easily be the output of any number of bland MTV-friendly American pop-rockers. Think Plain White T's.

They can at least serve up a more palatable form of imitation to be fair. Opening track 'Rock n' Roll (Part 1)' gives the impression that they might have arrived with album number two just in time to fill a Jack-n-Meg shaped void in the lives of those grieving that duo's dissolution, one of the few tracks where TGB sound like two-piece.

Elsewhere there are only moments of promise amidst what is mainly no-thrills anthemic pop-rock. The old school R'n'B piano stomp of 'Puppy Mills Presents' is another track which is slightly reminiscent of Spoon, but features a sudden mid-song rhythm-change, drifting into woozy romantic balladry with lush acoustic strumming pleasingly at odds with what came before it. 'Wasted On the Youth' at least aims at something slightly more interesting. It's perhaps the only song that succeeds in evoking any sense of atmosphere with its bare-boned acoustic picking, processed beats and effects-laden vocals spookily intimate until it is compromised by a clumsy chorus made for singer Westfield to bellow along with, a recurring problem on the record.
I'm not the first to notice that while Westfield is a technically strong singer, with decent range and power, he too often resorts to belting out the songs with an ever present waver in his voice that leaves him sounding overly earnest and devoid of nuance or subtlety.

Additionally too many of the songs sound tailor made to give Westfield the choruses he needs to do just that. Album closer 'Every Night Is Like a Revival' is a perfect case in point, a reasonably fun sort of glam-rock torch-song pleasingly at odds with the mundanity of the lyrical details (“We sit, you and I, one by one, on the drivers of this station wagon, my right hand in your left, the sun is setting to the west...”), but the chorus is just a big blank canvas of blandness for Westfield to wail over. Some might also be surprised by the sort of middle-of-the-road feel to it all, especially given the aura of subversive hipsterdom the duo seemed to project. Personally I think it's the sort of song that might be better with an Adele or Duffy on vocals.

On the other hand 'Why Winter In Detroit' speaks vacuous widescreen anthem from the get-go with its soaring guitar, pounding kick-drum and open hi-hat. It's the sort of histrionic indie-rock that innumerable bands have given us in the past decade and The Gay Blades bring nothing original or memorable to template, not to mention that it's all bluster and very little melody. 'Burns and Shakes' suffers the same problems although in its case the fault is more exclusively down to Westfield's whining vocal stylings.

The Gay Blades remain a band infinitely less interesting on record than on paper. Savages has its virtues, but they are few and far between and ultimately not enough relief from the pervasive mediocrity.