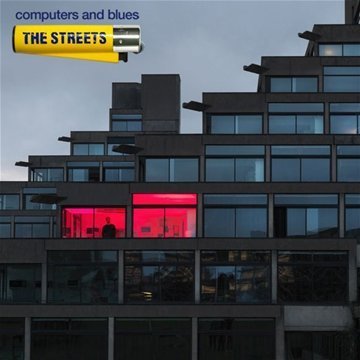 The Streets - Computer and Blues

So long Mike, and thanks for all the brandy.»

it's all of one minute and fourteen seconds into the fifth and final streets album before you realise that mike skinner has found a way of pushing things forward at the same time as bringing the streets' story full circle. 'computers and blues' crams everything mike skinner has learnt in the course of his very personal five album odyssey into a package as irresistibly box-fresh as his game-changing 2002 debut 'original pirate material'. in the course of this infectiously upbeat, tune-packed finale, the sound of the streets goes back to basics at the same time as expanding in all directions. it doesn't matter if skinner is making the impossible look easy by coming up with a uk rock / rap hybrid that doesn't sound like its trying to be jay-z's '99 problems' (first single 'going through hell'), inciting east london's mc community to hot tears of jealous rage with the deliciously complex alphabetti spaghetti of 71 second grime banger 'abc', or bringing the curtain down with a poignant swish via the office christmas special-style finale of 'lock the locks'. every one of these songs worms its way into the back of your head with the same insidious originality that first grabbed our attention in the days when the idea of a british rapper still seemed like a contradiction in terms. from the minefield of facebook relationship status ('omg') to the hysterical state of imagined combat readiness induced by spending too long playing call of duty ('without a blink'), to the heartstring-tugging 100 pixels of 'blip on a screen' ("you're growing thumbs / i'm going numb / tucked into your mum / looks like it could be quite fun"), 'computers and blues' addresses the interplay between human emotion and electronic communication with skinner's trademark self- deprecating wit. with the charts now awash with home-grown hip-hop phrase-makers, it's hard to remember that before the streets came along, the idea of british rapper all too often seemed like a contradiction on terms. it was mike skinner - along with his fellow 2002 breakthrough act dizzee rascal - who first taught us that the things a uk mc might have to say actually mattered more than how much they did or didn't owe their transatlantic source material. and 'computers and blues' sets the bar so high in terms of idiosyncratic beat-making and stream-of-consciousness language skills that even the streets' most illustrious musical inheritors will struggle to get over it.
description from www.roughtrade.com