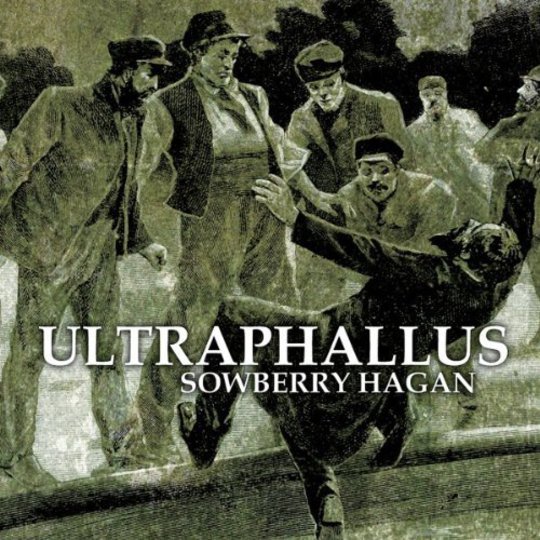 When you're presented with a band called Ultraphallus, a number of things might run through your head - besides the epic greatness of such a moniker, of course. However, whatever you think the accompanying material might sound like - say, apocalyptic, neo-fascist, euro-dance (just me?) - what does in fact lie beneath this imposing title are some of the most potent and uncompromising pieces of music that many of us would probably, quite effortlessly, label 'heavy', or perhaps more specifically - and to the band's disdain - 'doom', within a fraction of a second.

Dealing with the latter though, there are elements present in the Belgian group's latest effort, Sowberry Hagan, that are about as gut-bustingly heavy, achingly slow and disgustingly morbid as one would ever hope to hear from anything else haggardly taped to the genre. The spewing murkiness of opener, 'Pathological Freemind Verse' certainly brings about feelings of despair and indeed impending doom with it's slow, sludgy grind and bleak, bass-heavy fug. Much like the unforgiving gut punch of 'Indians Love Rain', which, as it emerges from flurries of tense, guitar atmospherics, soon descends into scattered moments of pure evil, pre-empting a riff of pure blues-inspired chaos.

But, like all good records this is an album too explorative and ever-changing to fit inside any man-made, and in this case, doom-shaped, pigeon hole. Purposefully recorded to omit a continuous, almost impenetrable haze - sometimes as a result of the 'Phallus's decision to record some tracks rough'n'ready in the practise room - the combination of full-force brutality, uncompromising samples and noise-manipulation help imbue the record with a palpable sense of destruction and danger.

Having said that, there are a few 'straight-up' numbers that show an occasional yet no less impressive knack for just getting straight to the fucking point with a bludgeoning, skull-crusher of a riff. 'Right Models' is a fantastic example, boasting rampaging, murky guitar licks and throat-slashing howls performed at such a pace, and with such groove that it sounds like apt musical accompaniment only to bikers - preferably undead - kicking the shit out of each other on some barren highway. 'River Jude' too, capitalises on the band's ability turn minimal notes into ear-baiting murder weapons, this time, adopting a more sluggish pace.

If things weren't already creepy and intrusive enough, 'The Crumbled's 12-second tip of the hat to 'Dueling Banjos' and, in turn, Deliverance, the movie that steeped it in infamy, interjects a little tongue-cheek darkness. Soon after, 'The Red Print' demonstrates another dirt-encrusted jewel in Sowberry Hagan's crown, teaming up with Oxbow's Eugene Robinson. Not nearly as direct as much of the material Robinson has been known to lend his hands and iron-clad croon to, let alone some of the pieces on this album, but this eight-minute long passage is just as, if not more unsettling, setting up the searing noise of closer, 'Torches Of Freedom'.

Ultimately, Sowberry Hagan might be an endurance test for anyone adverse to sprawling, manic and punishingly hard music but a rare gift for lovers of all things doom that want more balls, less formula.