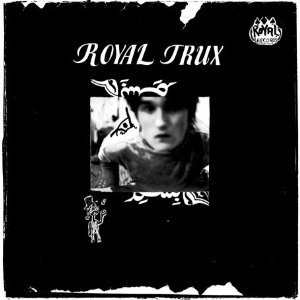 Royal Trux's legend hardly required them to produce any actual product, but somehow the records kept rolling out, and Domino has just had the decency to reissue the first four, without extras or explanation, a decade after the pair went their separate ways.»

Simply put, Royal Trux, consisting of members Neil Hagerty and Jennifer Herrema, made some of the strangest, most astonishingly visceral music recorded in the 1990s, which coupled with their trendsetting street hassle look, more than justifies their inspirational, influential & downright heroic cult stardom. Naturally Domino is very excited to announce the re-issued release of their first four albums, which will be available on 10th January 2011 on CD & LP.

Royal Trux began their mysterious legacy with four incredible albums, each amply displaying their progression as a truly unique creative force. Beginning with their debut album “Royal Trux” (The First Album) (1988) (REWIGCD3), which introduced adventurous listeners to their fusion of busted licks and synth abstraction, they would go on to create a mind-warping, double album classic with “Twin Infinitives” (1990) (WIGCD8), instil a new found, spooked sensitivity into their head distorting sound on “Royal Trux” (Skulls) (1992) (WIGCD5), concluding with their most widescreen, accessible sounding record, with the release of “Cats and Dogs” (1993) (WIGCD6).

These re-issues are a vital reminder of the incredible and innovative music Royal Trux began their career making, music which has gone on to influence artists as diverse as Sonic Youth, Hot Chip, The Kills, and MGMT (whose last album Jennifer Herrema actually featured on). Hopefully these reissues will continue to inspire a new generation of music fans, who for whatever reason, may have missed out on this fascinating band first time around.
description from pr