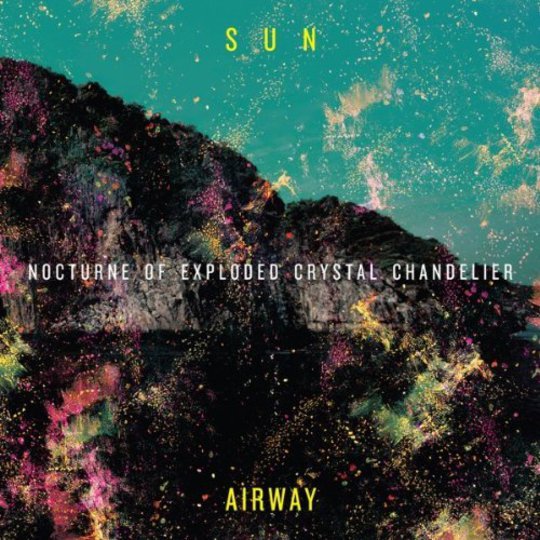 Music is moving quickly. So quickly, that Animal Collective will be working hard on putting clear blue water between themselves and Merriweather Post Pavilion. That is, before the inevitable occurs and they start getting accused of parodying themselves and/or imitating the music landscape they just created. While Baltimore's finest and Sun Airway - who hail from Philadelphia - currently share very different trajectories, the vapour trails left by their individual takes on hazy-but-hopeful electronica do criss-cross quite a bit. Whether this comparison is seen as a blessing or curse for Sun Airway will probably depend on the quality of their next record and how it sits among any further paradigmatic shifts in electronic music. For now, it's just useful. Useful for the band for obvious reasons, and useful for everyone else as a quality barometer.

It is fair to mention Animal Collective, or perhaps more precisely Panda Bear, in the context of this record. Nocturne Of Exploded Crystal Chandelier may have been recorded before ...Pavilion, but that matters less than the fact that it was made after Person Pitch. There are so many 'I <3 Noah Lennox' clues dotted about Nocturne: the anti-pop pop fearlessness; the layering and metronomic use of looped samples; vocals and repeated lyrics that often work in pretty much the same way; the almost complete absence of bottom-end bass and the tinny shrill that this absence leaves. As Panda Bear found, reducing the dominance of conventional bass-led rhythms lets other rhythmic structures create their own distinct moods. 'Waiting On You' - Nocturne's most immediately approachable track - uses Dntel digital snare taps and sleigh bells to produce a sound that's cold, but Christmas-hopeful and merry. 'Swallowed By The Night' is almost completely vocal-led, its soporific synthetic fabric providing the bed for lead singer Jon Barthmus' late-night lullaby. 'Shared Piano's opening piano loop tumbles then quickly climbs and really isn't far off 'Orinoco Flow' terrain.

Nocturne's pop-oriented feel may not possess quite the classical soul of Enya's delicate motifs, but her ability to construct weightless synthetic structures that take the listener airborne with them is imbued within it. Nocturne... is a strange beast. It's doesn't feel obsessed with nostalgia like chillwave can, but then some of its cues leave you scratching around childhood memories. Enya is one. Early Spiritualised is another. Opener 'Infinity's slow-moving morass of echo chamber synth and shoegaze floats along like Lazer Guided Melodies' 'Symphony Space'. Its basis is a sort of Nineties post-shoegaze pop that never allows itself to become unduly sombre, but has the 21st century confidence to give the listener something other than crafted, three minute Cocteau Twins songs. After prolonged exposure, Nocturne...'s eccentric title doesn't feel that far off. The warbling textural density and synthetic complexity of album highlight 'Put The Days Away' evokes a dream state, as delicate shards of fabricated rhythm come to resemble the glittering smithereens of broken glass.

It's not all as good as this. Occasionally Nocturne... is almost too inoffensive to provoke any interest beyond how pretty and/or 'dreamy' it sounds. Some tracks are too limited in their capacity to get you hooked on anything, be it melody, meaning or mood ('Your Moon', 'Five Years'). And Barthmus' lyrics don't always feel as convincing as they could be. There's certainly more to grasp onto during the subtly elegiac 'Waiting On You' than at other times where shorthand mysticism comes before real-life tangibility or something lyrically of more substance. And lyrical repetition is OK, so long as the repetition serves to accentuate something worthy and not just because that's what Panda Bear did. The slightly disappointing 'Five Years' closes the record by repeating the same pretty meaningless line 24 times. Too much, chaps.

It'd be interesting to hear this record without vocals. It feels like there are more synthetic things of interest here. There are significantly less organic things - lyrics, sentiments, meaning - that will keep you coming back. And that's a shame. But it leaves something for the Philadelphians to work on. And that's no bad position to be in. Look at Animal Collective. They've been doing it for years. Question is: can Sun Airway keep up?