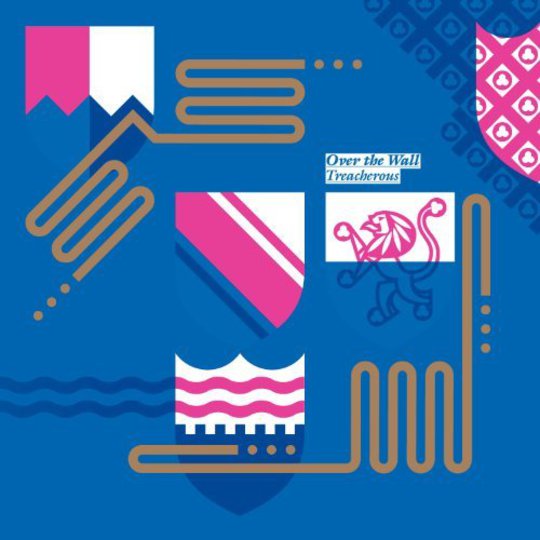 Accessibility – it’s the cornerstone of every great pop record. Let’s face it, other genres aren’t that easy to get in to, especially when they’re ushering you through a tiny, niche-sized side door that nobody’s really bothered about entering in the first place (hello, nu-folk). But pop’s different. It’s the massive, glistening gateway that welcomes everyone in with a playful pat on the rear and an enveloping hug.

Of course, pop also has its anachronisms. Acts like Talking Heads and Orange Juice passed themselves off as all-embracing entities, but below their aurally pleasing shell was a cleverness of sound that lifted them far beyond the standard chart bound production line. And to this day intelligent pop is the chagrin of chin-strokers everywhere, unable to fathom whether it’s ironic, annoying or actually just pretty tootin’ good.

Over the Wall’s new longplayer Treacherous will no doubt infuriate these scraggily bearded stooges. Awash with parping brass and slinging more hooks than a 'Peter Pan' casting session, the debut offering from Glasgow-based duo Gav Prentice and Ben Hillman could easily be misplaced as a glossy, snow-white affair. But entwined within the record’s honeyed core is a talent for making complex melodies sound sweet and simple.

It’s been a few years since the pairing were first touted for greatness north of the border, based mainly on their energetic live showings and the sumptuous folk-pop lament ‘Thurso’. Spruced up with a coat of production polish, the track’s nostalgic swoon bookends the ten tracks that precede it here; representing a triumphant climax to a record that’s often rewarding but occasionally naïve in its presentation.

Opening number ‘Shifts’ sets a frantic early pace that’s ignited by Prentice’s brogue-stained wail “we only have tonight”. This pulse-raising explosion of drum machine and keyboards segues perfectly into the old age-avoiding ‘Settle Down’, where a snowstorm of epileptic chime is replaced by the rally cry “go break free, it’s not your responsibility” bellowing out like a call to arms for disaffected twentysomethings.

The theme of gawky-youth-cum-adult insecurity frequently rears its head - from ‘Don’t Listen To Them Son’s gleeful rollick to the lovestruck blows of ‘Angela’ - and for the most part fashions out a deliciously catchy affair that’s caked in typical Scottish retrospect. But, with tortured lines like “Jess and the others could see my willy and it was embarrassing”, ‘Two Nightmares’s guitar twanging shtick is a step too far. It may spawn an immediate chuckle, but this schoolboy immaturity reduces an interesting composition into the album’s one true lull.

For a band so focused on immediacy, it’s the less-accessible numbers that showcase the duo’s full range. Built on a foundation of blinking keys, ‘A History of British Welfarism 1945-1984’s guitar-stained crescendo is a sobbing joy of indie-pop histrionics. ‘Stages’ is just as segmented and equally dramatic, setting off on brooding piano wander before rising as an insatiable toe-tapper that could easily slot into Field Music’s more choral undertakings. So much for single track pop ponies; this is a band with a motorway of ideas.

If widespread adulation was the objective, then Treacherous has just missed the mark – the gulf between euphoric romps and obstinate cuts is too wide to be populous. But what Over the Wall have produced is a shining debut LP brimming with the sort of effervescent melodies Scotland hasn’t created since the early Eighties. Sure, it doesn’t fling its doors wide open for the masses, but then you only really need to knock and let yourself in.