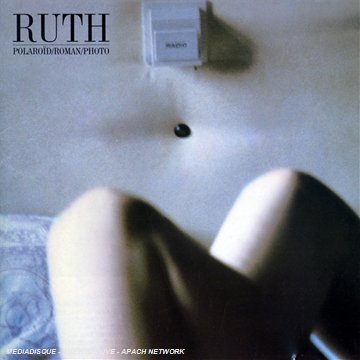 Twenty-fifth anniversary re-release for this flop 1985 album, now returned to us as a totem of the cold waves/minimal electronics 'movement'.»

beautiful, limited edition gatefold reissue with booklet and download code. one of the stand-out tracks amid the recent frenzy of cold wave archeology was 'polaroid / roman / photo' by french loner 'ruth.' now angular recording corporation, responsible for the amazing 'cold waves & minimal electronics' comp have re-issued the full length from ruth, an lp which originally sold just 50 copies. ruth was the brainchild of thierry mller, a photographer and graphic artist from paris who drew his inspiration from bands and artists like brian eno, stockhausen, pere ubu, neu, velvet underground and kraftwerk. in the late 70s he began to work on ruth, releasing the lone album 'polarod/roman/photo' in 1985. the line up of ruth was collaborative and fluid, brass mingles with prototype drum machines, and squalling experimentation sits alongside sultry french girls across 40 minutes of edgy pop innovation that sounds remarkably undated alongside contemporary pop music. from the jittery 'thriller' with its telephone sound samples and an ever ascending synth, to the lanquid 'mabelle', the cover of can's 'she brings the rain', and the sexy soiree of playful vocals and alluring brass that is 'polarod/roman/photo', this is an album that is now ready to be represented for the attention it deserves.
description from www.roughtrade.com