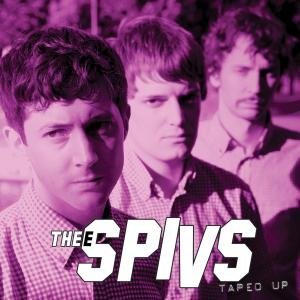 That, however, is all that makes the song stand out. After ten or so minutes of rapid-fire power chords and snotty vocals, you get the idea and wonder why you aren’t listening to one of the bands who covered this ground the first time around. »

thee spivs have been playing raw and primal garage punk music all over london for the last three years in any venue, party or street that will take them. after forming in 2007, members, ben edge (guit / vox) dan may (bass) and steve coley (drums) quickly gained a reputation for their energetic and unpredictable live performances. they met up with liam watson from toerag studios in 2009 and recorded a few tracks of which two tracks came out as a limited one off 7' on 1965 records in late 2009. after a successful european tour in spring 2010 they set off recording their debut album, 'taped up' which is now complete and released on damaged goods. includes their first single 'it's true' plus their new single 'i don't want it'. it's an edgy mix of punk, garage and a bit of rock 'n' roll, it's a storming debut!
description from www.roughtrade.com