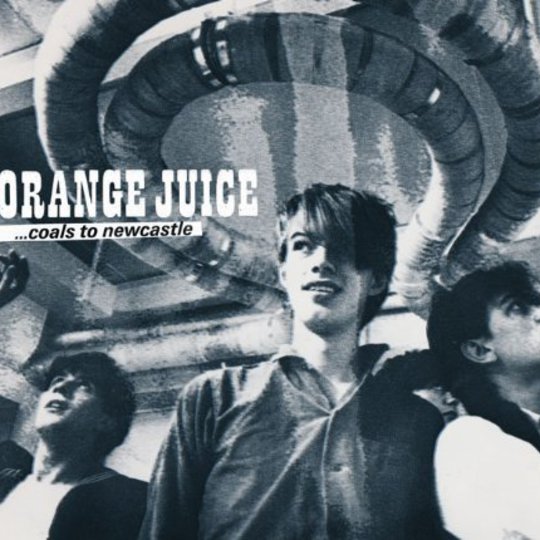 Over the last decade Orange Juice have been cited as a key influence by all manner of acts. Unfortunately the casual punter has for some time had difficulty in discovering what the big deal is. The Glasgow band’s key components – their spindly, DIY take on soul, Edwyn Collins’ unusual croon, their joy with an absurb lyric – were clear to see as an influence on everything from their Eighties contemporaries right up to modern indie adventurers such as Wild Beasts, but there was never any sense of completeness for anyone really wanting to get their teeth in. To see the sleeve of 1982’s You Can’t Hide Your Love Forever proudly displayed on the sleeve of a Belle & Sebastian DVD but not be able to go out and listen was perhaps the indiest cock-tease available.

For anyone wishing to fully delve into the strange of world of Orange Juice, the drip-drip availability of compilations and reissues was both alluring and frustrating. However, the itch can now be comprehensively scratched with Coals To Newcastle, a seven disc box set that gathers together Orange Juice’s complete discography, including radio sessions, B-sides and a collection of videos and live performances that couldn’t be more of their time if they came on VHS.

Like a lot of box sets, this sudden torrent of material can initially be overwhelming. Although Orange Juice come from an era when the B-side could be just as impressive as the main event, it can still be a struggle to maintain enthusiasm when listening in massive stretches. But then again, it’s probably not designed to be devoured that way – Orange Juice were such a strange beast, changing their line-up and musical leaning so quickly, that the only real mainstay was Collins’ absurd, cocky but vulnerable voice at the heart of it all. Instead, Coals To Newcastle works as a series of Postcards (arf!) showing how Orange Juice morphed from a gangly, awkward bunch of boys who should know better into a more widescreen but ultimately frustrated group.

The first disc on Coals To Newcastle is actually a bit of a misstep, as it’s already been released as 2005’s The Glasgow School. Appearing here with some changes to the track listing and a couple of interesting additions, it essentially serves up an initial taster of Orange Juice #1. This is the Orange Juice that felt they had the world at the feet, that had the London music scene scrabbling up past Hadrian’s Wall to find ‘the sound of young Scotland’, only to find it dressed like “a member of the aristocracy down on its luck”.

This era of Orange Juice, the one that has probably caused the most ripples in indie circles since, is encapsulated by discs one and two, the latter of which contains You Can’t Hide Your Love Forever plus myriad extra tracks. Together, they encapsulate what made the band so exciting at the time, and what has intrigued certain sensitive types ever since.

To suggest that the band’s ability never quite matched up to their ambition here might sound cruel, but it’s meant as a compliment. The likes of ‘Falling And Laughing’ and ‘Simply Thrilled Honey’ are solid gold classics, a rush of adolescent feeling wrapped in furiously strummed guitars. Elsewhere, the band’s almost punkish belief that they can do anything – write grandiose reflections on catching your reflection in a mirror, or imaginings of retribution to local bully boys – is rendered more human by the slight missteps the band make, words packed in like an overstuffed suitcase and rhythms discarded mid-song before being picked up again later on. The giddy sense of abandon can still be heard today, and is still infectious for the listener.

The benefit of the box set is captured in the first track of Coals To Newcastle’s third CD, ‘Rip It Up’, easily the most recognisable Orange Juice song and their only real hit. It’s a shock here as it marks such a change from the earlier discs, with the first incarnation of the group dissolved and Orange Juice reconstituted as a pop-funk curiosity, and most significantly joined by Zimbabwean drummer Zeke Manyika. To hear the Rip It Up LP, full of sax solos, squelching keyboards, and Manyika’s multi-layered rhythms is quite jarring, but the juxtaposition underlines the similarities with the earlier Juice.

Collins' unmistakable voice is still there, and so is his grand ambition. Opening the album with their perfect pop single, the band follow it with ‘A Million Pleading Faces’, an afro-beat inspired shake-up of proceedings, and then follow that with ‘Mud In Your Eye’, a slice of blue-eyed soul that wouldn’t sound out of place on a Style Council LP. Elsewhere, Collins resurrects an old b-side that opens with him proclaiming “breakfast time! Breakfast time!!” over a slouching reggae rhythm.

Rip It Up is full of enough strange stuff to keep us intrigued today, and plenty of genuine pop moments – the Motown homage ‘I Can’t Help Myself’ for instance – that should have fired it to big success. That it didn’t perhaps explainbs Orange Juice's next move.

Discs four and five are based around the band’s next official releases, mini-album Texas Fever and their swansong, The Orange Juice, both released in 1984. The contrast between the two is intriguing as it shows a side of the band that hasn’t really been captured in the Orange Juice compilations released so far. It’s clearly still from the same minds that concocted the jittery, excitable early act and the smoother, shades-wearing Orange Juice that appeared on Top Of The Pops, but it’s somehow a bit harder, musically speaking.

This is where Coals To Newcastle really earns its spurs. To hear Texas Fever is to find a band stripped of the musical excess of ‘Rip It Up’, replacing it with a Sixties-inspired world of close harmonies and even - shock horror corduroy fans - guitar solos. It still finds time for Collins to fit in a ridiculous ‘scary’ voice on ‘Craziest Feeling’, but it wouldn’t be Edwyn if it didn’t slide towards the ludicrous on occasion.

Listening to The Orange Juice, made when the band was officially just Collins and Manyika, again underlines the benefit of the box set. Overshadowed by the more popular and more influential parts of the back catalogue, here it can be judged on its own merits. Thankfully, it stands up well. Its mood is captured on ‘A Little Too Sensitive’, on which Collins turns his trademark cynicism inward, and seems to analyse just why he’s been left standing (almost) alone whilst the music he helped to create has gone on to soundtrack the early part of the decade.

It’s a reflective end to the band’s discography, albeit enlivened by the track ‘What Presence?!’, an early indicator of the guilty pleasure silliness Collins would bottle on ‘A Girl Like You’, and ‘Salmon Fishing In NY’, a heavier number that ends the record in a blizzard of guitar feedback. Accompanied here by numerous b-sides, live tracks and, believe it or not, dub mixes, plus that extra disc of radio sessions, it means Coals To Newcastle lacks a real finale, but that’s a problem of box sets in general, not just this one.

So what to make of the whole thing? Well, as an introduction to the band, it won’t work, simply because of its size. For that, you can get The Glasgow School and hear the influence of that early Orange Juice. For those that want to delve deeper however, this is pretty much darned essential. It confirms Orange Juice as more than an influential indie band – it shows up their ridiculousness, their ambition, their open-mindedness, their limitations, their self-reliance. It leaves you converted to their cause, whatever it is and however foolish it may be. It’s also something you can see yourself returning to, rather than keeping on a shelf for posterity. You can’t really ask for more than that, can you?

Wild Nothing, The Vaccines, Glaciers at The Harley, Sheffield, Sun 07 Nov