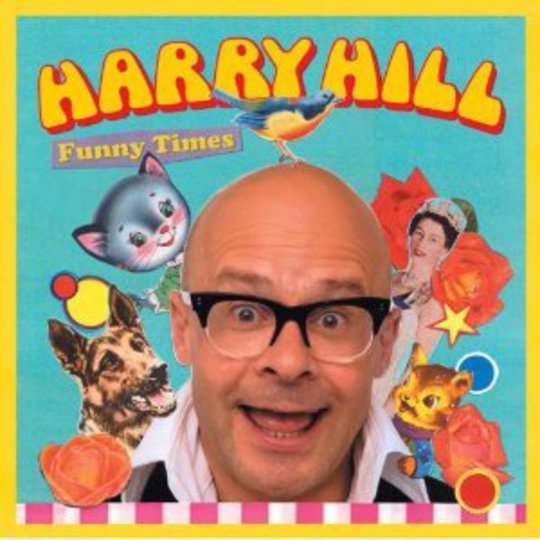 Without going into any great sociological tracts, it's fair to say that Harry Hill is a popular fellow, and well-loved across the entire nation. He's also a funny sort of bloke and has been for a while. Much of the press surrounding this release had been about The Beatles "preventing" Hill using the original intended title (Sgt. Pepper's 2) and that Johnny Marr blocked the Smiths medley that was due to feature at the end of it all. On Marr, you end up jumping, rightly, to the conclusion that he was given a promo copy beforehand and probably didn't even get to the Morrissey-aping finale.

There are several problems with this album. The first is that it's absolute shite. The second is related to the first and is that Hill is, or was, up there in a select group of comedians that it's OK for everyone to like. Not that people should be selective in what they find funny, but they often are. There are many different strands to this record's sheer horridness and all of them are in abundance from the start. We are drowned in something unpleasant on track two, with 'I Want A Baby' which , remarkably, was chosen as a single. The lyrics “And when I'm 15 / I'll take my boob job / on my trampoline” hang like a sodden, shitty sock on a winter washing line. At this point – and this point is little more than three minutes into the whole album – it's not sure who's having the piss taken out of them or who is meant to be taking the piss out of who. It is clear, however, where the piss is coming from.

The track about ever-present Coronation Street character Ken Barlow ('Ken!') is more what you'd expect given the whole TV Burp thing, and keeps firmly away from the fairly pointless attempts, ironic or otherwise, at social commentary. It is, however, mainly samples of Barlow's voice. The mind does keep wandering back to 'I Want A Baby' though, almost incessantly. It's a bewildering experience all-round and pretty much every ten seconds you'll end up asking yourself 'Why Harry, why?'. As time goes on – and it moves very slowly in the world of Harry Hill's Funny Times – you stop searching for answers.

Much of the baffling nature comes through because it's hard to understand not so much why this album was recorded, but why and how it actually got to the stage of release. Harry Hill's not an idiot. I'm sure he hasn't got a Ryan Adams-like contempt for any sort of quality control, otherwise he'd have had several autobiographies and appearances on more than one of those popular TV entertainment panel shows. You'd like to think of him as the comedian who does things on his own terms but it's hard to believe that Funny Times would have seen the light of day without someone holding a gun to someone else's head or Harry's testicles in a vice. Yes, it is unnecessary – it always would have been – but a sprinkling of humour here and there would have been nice. That said, Adam & Joe's Song Wars: Volume 2 is also available, so just hang on and get that instead.

Light of a Vaster Dark