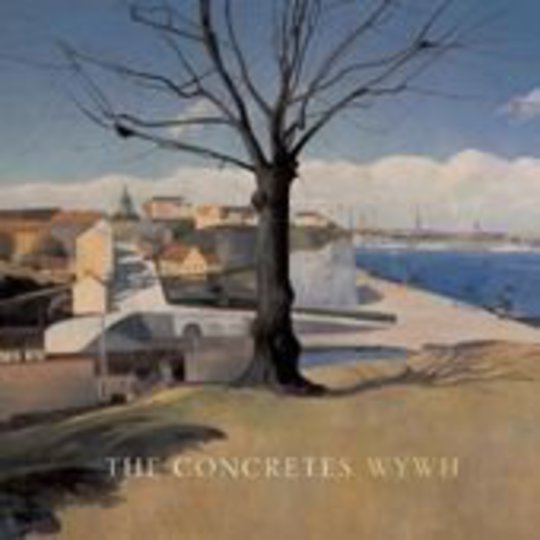 The press release (sorry, it’s going to be one of those intros) accompanying The Concretes' fourth album refers to the band as eight piece, but come accompanied only by a picture of a blonde lady in some fetching spangly hotpants. This is of course Lisa Milberg, WYWH is her second record fronting the Swedish band, and clearly thing have changed since the days when Victoria Bergsman helmed this ship (a time when most of the band’s publicity images seemed to consist of weird drawings of cats). In fact, comparing the smooth disco beats, lovelorn lyrics and solo frontwoman vibe of WYWH to the lo-fi, Motown referencing, cryptic lyric-ed, girl gang-ish image of the Bergsman days, one wonders if the only thing that stopped the band changing names was that they felt silly doing so when there were still so many of them.

Yet despite the fact that the video for new single ‘All Day’ features Milberg moping about in a nice apartment whilst wearing short shorts and looking like an all round well groomed chart starlet, WYWH isn’t quite a full on dive into poppy waters. This is good, in a way, as certainly WYWH’s down at heel tone and air of melancholic resignation gives it some degree of continuity with the band’s earlier material, and certainly counterbalances a couple of more saccharine moments. But on the flipside, WYWH is very definitely at its best when it’s at its most shamelessly old fashioned and hooky.

We're talking choruses, basically, and WYWH has some doozies. Second track ‘My Ways’ is, like much of WHYWH a slinky slice of minimalist disco pop (in this case abetted by a pretty cool melodica line), but the chorus is what counts, pure Dusty Springfield as Milberg’s voice cracks just perfectly on the line “I can‘t promise more than that I’ll try, I’ll try and change”. ‘All Day' peaks with a languidly anthemic chant of “we’re going to stay in bed all day, all day” set to a sort of Brand New Heavies-esque funk that sounds not at all hateful. ‘What We’ve Becomes’ adds an element of danger, insofar as it sounds a bit like Sleigh Bells gone AOR, muted klaxons and mildly aroused bottom end cradling a hook like about how “We can drink whiskey, play songs by Squeeze, John Cale and Paul Simon”. It's great, but nonetheless entirely trumped by ‘Oh My Love’, the chorus of which is just the title words sung over a bit of glock. It has the type of unassailably radiant beauty that only comes with pure, unselfconscious sincerity. The same can be said of the sobbing mini melodrama (“he put his hand on my heart, he said it’s broken somehow”) of ‘Knck Knck’. And the concluding title track is just superb, showing how much this expansive band is prepared to strip down to really thrust Milberg centre stage, a disco (of course) bass prowling forward unaccompanied by anything bar a few sultry gusts of synth, the singer gliding in with poised detachment to declare “you and I, we’re just a postcard, wish you were here, with love, best regards”. It’s classic pop theatricality: captivating, slightly cheesy, and just spot on.

Without wishing to dwell on the downside of what is a very nice album – certainly the band’s best since The Concretes - then there is a danger to all the pop class on show, and that's that you miss it when it’s not there. Songs like ‘Good Evening’ and ‘Crack In The Paint’ glide past with immaculately composed froideur, but what you really want is for the singer to bare her quivering heart and set us reeling with some stratospherically gorgeous chorus. Despite the Milberg-centric promo materials, The Concretes are clearly not just a solo star plus musicians, but the more singer-songerwiter-esque songs are the strongest here. Whatever the case, The Concretes are no longer the indie band they once were; but they’re not quite the pop group they could be.