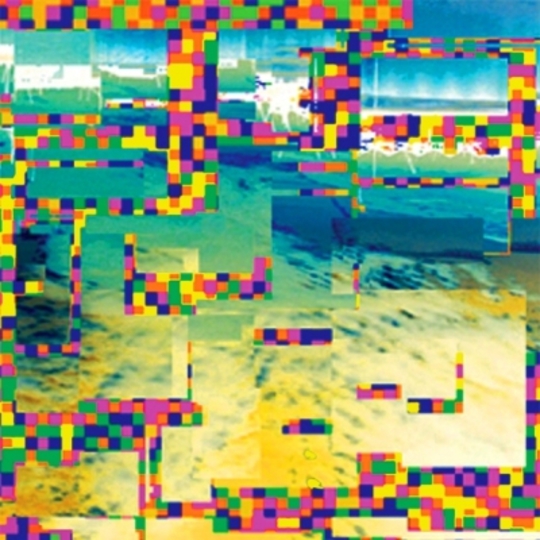 I suspect that if Islet had come together five or six years ago, rather than about 18 months as is the case, they would be a quite different band in many ways. Not necessarily musically – there were plenty of bands cultivating scrappy, tangled landscapes of Krautrock and no wave and postpunk and other addled egghead genres in the middle of last decade too – but in terms of their presentation and self-image. Wimmy is a mini-LP which features six songs in nearly half an hour, as was Celebrate This Place, their debut release from early summer. They have been slightly more friendly this time by not forcing you to buy the vinyl if you intend to listen digitally, but it remains evident that the Cardiff-based quartet’s intent is to give you a piece of art (as in, an attractive sleeve which would look good on your wall, if you were so inclined) rather than attempt to penetrate some micro-market.

As has been reiterated in several thousand op-ed pieces, opportunities for bands to get ‘big’ as it used to be understood have dwindled in recent years, the silver lining being that people who would have perhaps once seen flashing pound signs are now more inclined to quash thoughts of making rock music their day job and create a noise divorced from cynicism. (Have you noticed that people don’t sarcastically invoke the band-interview canard 'We do what we do and if anyone else likes it that’s a bonus,' as much as they used to?) Islet have – again, I only suspect – taken the steps they have with an understanding of their position. One of the band, Emma Daman, used to be in clattery indie ensemble The Victorian English Gentlemens Club, who were signed to Fantastic Plastic for a while. Doing things to more or less the indie-industry standard hasn’t exactly made stars of them.

The initial flutter of media attention on Islet last year rashly overemphasised their lack of self-promotion: reading some of it, one would think that not putting their songs on MySpace (a website deemed to be practically on its deathbed by many observers) made them the lovechildren of Jandek and Howard Hughes. It does, however, betray the band’s essential 'if we build it, they will come' ethos, which thus far has served them well, in that they have made people dance to odd, angular and sometimes abrasive music with frequent surprises. A track like ‘Living In Manila’, the third on Wimmy, is a choice introduction to their music, doing most of the things Islet do across their small catalogue: choppy percussion like you might find on a Tussle or Gang Gang Dance record, guitars switching between highlife-derived twittering and murkier, Mogwai-ier riffs, group chanting to see us home. You never quite know where these parts are going to appear, though, which aids their freshness no end.

For all that, they have other modes. Lead song ‘Dust Of Ages’, for its first 90 seconds at any rate, has a mournful and somewhat churchy sonic paint job; the vocals of Johnny Thomas bear a striking resemblance to ‘Exit Music (For A Film)’ by Radiohead. A near-self-parodically sad song with the power to reignite suicidal thoughts in a young man recently cured of depression by Father Ted, it's an odd locus of comparison for Islet, whose cumulative praise to date has largely zoned in on the unfettered joy they seem to convey through their music. Although this is still very much the case in respect of their live performances, this isn’t really accurate as regards Wimmy. More so than Celebrate This Place, it’s a record with dark and faintly unsettling moments.

‘Obtaining’ is also abetted by a vocal from Thomas which sounds like it’s been transferred from a century-old wax cylinder. ‘Powys’ begins with some granular electronic ugliness and continues with little more than drums and Mark Thomas’ processed voice singing something indistinct about the Welsh county of the title. The group vocals at the end are accelerated to sound like the cries of children, because why not. Even the parts that sit in a place of good cheer tend to have something creepy about them; while the band’s frequent doubling-up of vocals and instrumentation gives Islet a sort of avant-gang feel, it often seems equally like a private joke, or set of personal memes we’ll never be up to speed with.

Assuming they don’t split up after Wimmy, Islet will almost certainly make a better record than this. Not because it isn’t good, but because you can tell how the abundance of ideas and flights of fancy herein are on their way to coalescing, without fully doing so. Many bands of a similar ilk to them did this without sacrificing their edge or personality: Oneida spring to mind, likewise Dirty Projectors, Deerhoof, even Can gosh darn it. Some of those shoes are pretty big, but it’s probably not prudent to think about it in terms of stepping into them. You can look at it as an example of how 2010’s musical climate can facilitate rad noise, or just as a sweet slab from a band who are walking to, basically, their own step.