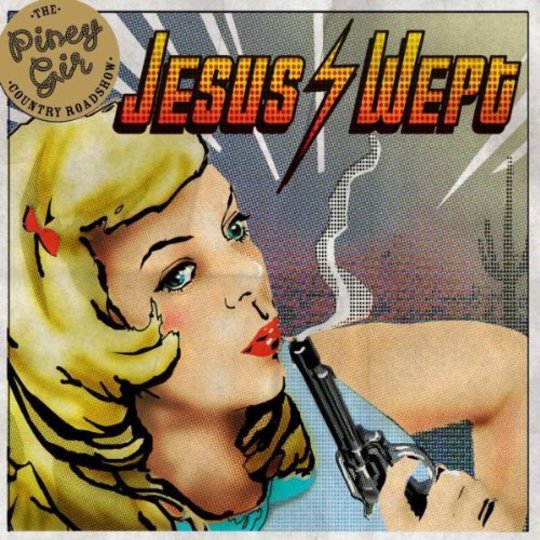 The latest full-length from Piney Gir sees the Kansas-born, London-based 'slightly unhinged woman' (as she’s intriguingly tagged on last.fm) railing against her religious upbringing and romantic misfortunes, with varying degrees of success.

With Jesus Wept’s tales of debauchery and vengeance transmitted via Angela Penhaligon’s gentle, girlish voice, her Piney Gir persona is firmly established as a good girl gone bad. When it comes off, for example on ‘I’m Better Off Without A Piece Of A Shell Of A Man’, it’s an arresting proposition. As if the song’s title weren’t withering enough, Piney reels off a comprehensive list of put-downs to her pathetic former beau, before finally attending his funeral just to check that he’s dead.

It’s the track’s matter-of-fact tone that makes the spite so potent and tangible. Trouble is, for a good deal of the album, Piney instead casts herself as a cartoonish swashbuckler, a role she can’t quite pull off persuasively. The record begins with the lusty ’40 Days And Nights’, which sees Piney attempting to lure her man away for a six-week bender, but her cutesy vocals can’t quite inject the sassiness that the song requires. Meanwhile, in the galloping drama of ‘The Sherrif Of San Miguel’, she threatens revenge on her wayward lover, but is unable to summon enough chutzpah to really convince.

It’s probably no surprise, then, that the album’s most successful moments are its prettiest. The breezy toe-tapper ‘Lucky Me’ and the defiant melancholy of ‘Fast Cryin’’ both have melodies and harmonies to die for, but the pick of the bunch has to be ‘Great Grey Belly’, the type of open-hearted pop song that has you clutching your knees with glee. It’s tracks like these that suit Penhaligon’s voice perfectly – set against the jaunty backing, her lilting tones serve as a pleasingly unaffected counterpoint.

Rather than merely sticking to what it does best, it’s admirable that Jesus Wept chooses instead to run the gamut of country subgenres. But while it means that the record has an impressive range, it also means it can only be considered a qualified success.