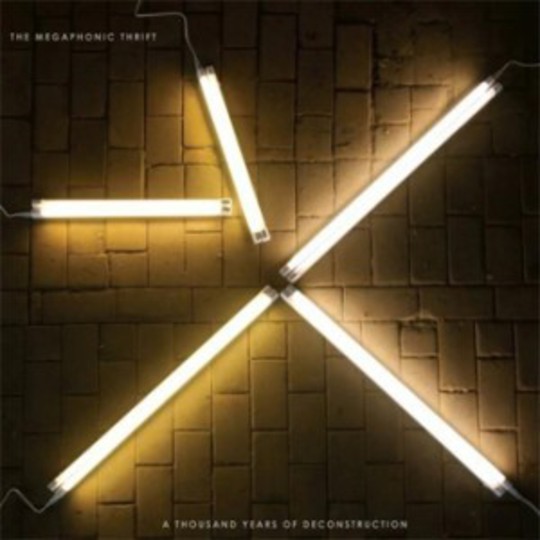 Bergen quartet The Megaphonic Thrift's roots may lie in picturesque Scandinavia but like fellow Norwegian noise rock ensemble Serena-Maneesh, their hearts and minds are firmly fixed somewhere between Reading and New York circa 1989. While it would be unfair to call them copyists, there's no doubt their music owes a small debt to Sonic Youth and Dinosaur Jr's past glories with a hint of Ride thrown in for good measure.

Nevertheless, the fact they're unashamed about displaying their influences boldly across their chests at least ensures one knows what they're going to get, and on that front The Megaphonic Thrift don't disappoint. Having formed two years ago - A Thousand Years Of Deconstruction actually saw the light of day back home in December last year - they've steadily built a reputation as one of the most enthralling live bands on the shoegaze/noise circuit, culminating in a high profile support slot on A Place To Bury Strangers' European tour earlier this year. Indeed, anyone fortunate enough to witness their live show will probably still be suffering from tinnitus, as if there's one thing they learned from their New York tour buddies, it was to turn everything up to the maximum.

Anyhow, back to the record, and with the first two tracks 'Acid Blues' and 'Exploding Eyes' the Sonic Youth references emerge instantly, the former closely resembling a more frenzied 'Total Trash' while the latter digs for any lasting remains in Urusei Yatsura's long-since deserted backyard. What sets them apart from contemporaries of a similar guise is the taut musicianship throughout and Richard Myklebust's bile-spitting vocal delivery. 'Every Time (Oxygen)' slows things down a touch, adding a drop of intensity to the mix over its three minute anti-lullaby, while 'Mad Mary' picks up the pace and distortion levels before engulfing itself in a cloud of fug in the final third of its apocalyptic six minutes.

By the time 'Son Of J' restores the pop sensibility via a three chord reverie straight out the Mascis and Barlow songbook, it's left to the EP's title track to state The Megaphonic Thrift's future intentions. Clocking in at a mammoth seven-and-a-half minutes, 'A Thousand Years Of Destruction' obviously sets the band an interesting dilemma as to whether they continue down the well-trodden route laid out by Thurston Moore and co, or progress down the hazier, more experimental one explored at the EP's widescreen finale. Whichever they decide to choose, you can be sure it'll be an exhilarating voyage of discovery.