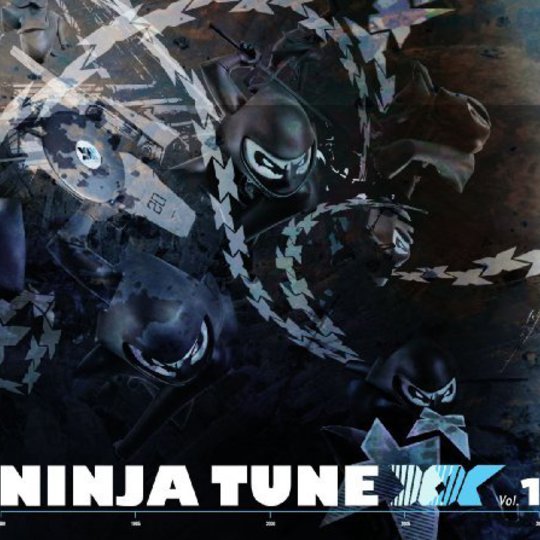 Of all the important seasoning that goes into making a label successful, having the capacity to adapt and diversify to stay fresh is the most crucial kick. You could be releasing the biggest meat-wrapped pop banshee on the planet, but if you’re still hanging out those same cuts in five years then new music fans will chuck them up quicker than you can say ‘badly packed kebab’. Gross. And so that’s exactly what London-based dance label Ninja Tune does on its birthday compilation (staying fresh, not fiddling with meat kebabs, mind). It's a six-disc box set that marks two decades since beatsmiths Coldcut kickstarted Ninja Tune into experimental electronica and hip hop-informed life in 1990, with the first four CDs available to buy as separate double-discs.

For many, the label recalls kitsch mixologist Mr Scruff or a night mingling with be-dreaded chillout enthusiasts. But rather than simply lolling over its history, Ninja Tune XX presents a complex 'futurespective', which is far more exciting. It’s less of a lean into the sampledelic, noodly and nu-jazzy hip hop the label is most renowned for and more of a bass-heavy thrust towards electronic scenes moderne, cherry-picking from across the board of forward-thinking wave of UK funky, dubstep and house-inspired beats.

That’s not to say that everything on the compilation is brand new. Older tracks surface on each disc, but most have been reworked to bring them up-to-date. Even Roots Manuva’s label-defining anthem ‘Witness (1 Hope)’ appears with a rowdy makeover from up-and-comer Slugabed. Cue a lump of exclusives as remixers cramp onto the tracklistings, coming from both innovators Autechre, Mark Pritchard and 808 State and rising producers like Floating Points and Scuba. It looks shoehorned on paper, but, thankfully, it doesn’t feel too crowded. The Ninja Tune way is certainly not less is more and, so too, the dubstep-inspired tracks you’ll hear aren’t techy, minimalist and understated: they’re brash, driving and crunkin’.

Nor is the box set divided into discernable eras in time. Each disc has a vague destination, but they are riddled with unexpected twists. Disc one is arguably the sound of Ninja Tune today, with new, more dancehall-inspired offerings from Roots Manuva, a funky turn from Toddla T featuring Ms Dynamite, plus wonk and glitch-hop elsewhere. Following closely, disc two gets dubbier and more electro-playful, with Bmore rapper Spank Rock and co leading the way. Disc three, however, evidences a more classic jazzical Ninja Tune, with some of the lush folktronica and chillout fare you might expect, from Lou Rhodes and The Cinematic Orchestra, Grasscut, Tunng, Bonobo et al.

Finally, we hit disc four. It is purely terrifying until Hot Chip’s delightful Balearic disco-cum-womping house remix of Roots Manuva’s ‘Let The Spirit’ kicks in. We hear Ninja Tune take their darkest turn on King Cannibal’s ‘The Grind and Crawl’, with its piercing shrieks and samples of a knife being sharpened, flooding through beats that seem to ricochet across a foreboding alleyway. Then veteran artist Amon Tobin’s ‘Foley Versions’ (Kronos Quartet Interpretation) out-disturbs that, recalling being locked inside a nursery where the cots are creaking and the hanging mobile makes ominous shadows on the wall. Even Four Tet, prince of lush, groovesome beats, manages to add a maniacal edge to Antipop Consortium’s ‘Volcano’ with its mosquito-pitched flutterings like a trapped butterfly. We’re still to scared to turn out the lights.

After our imagination calms down, though, we recognise that Ninja Tune has locked onto all sides of the futuristic electronic spectrum, especially the global strands of so-hawt-right-now 'future bass'. It’s an amalgamation of squashed, disconnected hip hop, neon-tinged soul, mutant electro-funk, most likely recognised from Flying Lotus and his ilk. His LA Theory club-reared sound is here of course: he remixes Andreya Triana to dazzling effect, Edwardian funkster Daedelus’s ‘La Nocturne’ – one of the label’s killer weapons – sounds positively euphoric, while The Gaslamp Killer clocks in with a DJ Vadim remix. Over in Glasgow, the Numbers camp are given a mouthpiece through serious one-to-watch Offshore, whose debut EP is set to drop on Ninja Tune sub label Big Dada in October, and Warp-signed Rustie. Elsewhere, the future dubstep and wonk sounds of Kode 9’s Hyperdub stable have their moment with Zomby, Joker and more; post-garage and 2step surfaces from EL-P and NYC’s Todd Edwards; and the jump-up wave of digi-dancehall magpies, featuring Toddla T and Diplo, stands out too.

It’s an exhaustive delivery, but the result is the healthy sound of a label’s output to come, not the ghostly echo of one stranded in the past.