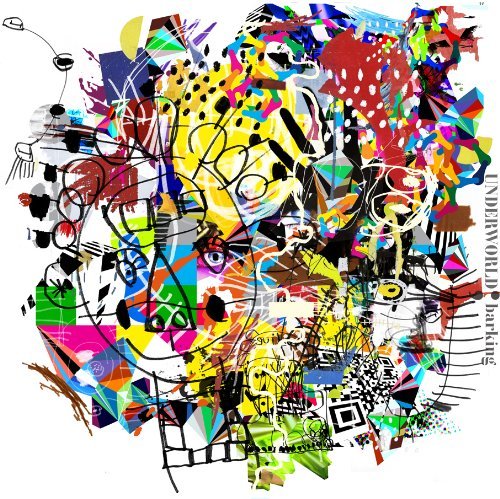 Barking is still a credible effort and a pleasant listen, but it is also unremarkable and, had it been released by artists whose fame didn't precede them, it probably would not have made any waves.»

to celebrate their 30th year together, underworld return triumphantly with their first new album in almost 3 years. 'barking' is the duo's sixth studio album and the first time karl hyde and rick smith have collaborated with other producers. the record enlists the help of techno producers mark knight and d ramirez ('always loved a film', 'between stars') plus a whole cast of brilliant and like-minded producers from across the spectrum of modern dance music to add personal touches to the band's original material. enter welsh drum and bass artist high contrast ('scribble', 'moon in water'), four-time grammy winner dubfire ('bird 1', 'grace'), bristol based dub step producers appleblim and al tourettes ('hamburg hotel') and long term underworld team member darren price ('between stars'). the question is, with such a glittering cast of extras, how does it actually sound? from the first undulating pulses of submariner bass, the first vocals - 3 soft like a whisper in the ear - and the first fizz of hi-hats that force along the pace, the sound is unmistakably underworld. electronics wrapped effortlessly around songs; streams of consciousness lyrics that form indelible images; a perfectly balanced mix of melody and rhythm. underworld's sixth studio album is a thundering return to form, although it's fair to say that the band responsible have never really been below par. like the bomb on the icarus ii in sunshine, this new process of working had the effect of not so much reigniting a creativity within the band as exploding it into myriad new fragments. and through all of this, brilliantly and uniquely, it sounds just like underworld.
description from www.reoughtrade.com