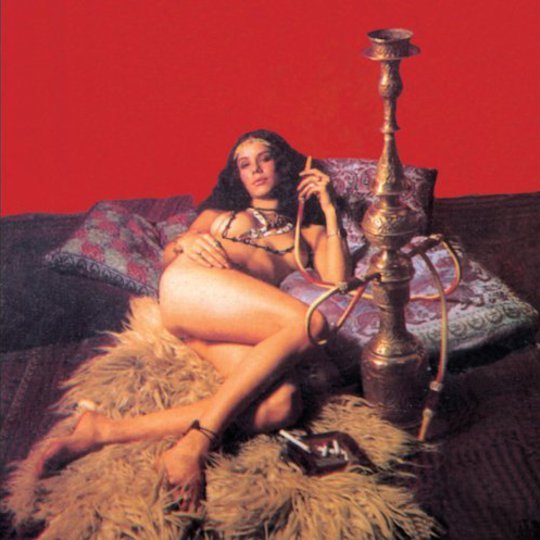 The reissue of Relaxing With The Heads, the debut album by Bristolian stoner-psych mong-o-lude monoliths The Heads, is long overdue. From the perspective of you, the would-be consumer of the pepperiest riff salad, this is because it’s been out of print for… well, Christ knows how long to be honest, but it was released in 1996 and its original label, the UK division of Headhunter Records, released basically nothing afterwards. From the perspective of the band themselves, it means that this mud-flapping sonic throb is no longer ‘of its time’ and can get appraisal without the irritation of douchenozzle reviewers saying things like 'They may be from Bristol and pen paeans to weed, but don’t mistake The Heads for a trip-hop band!' Obviously that is what I just did then, yes.

Relaxing With The Heads returns as a double CD, with the original album checking in at around three quarters of an hour – plus another half hour if you count the extended jam tacked on to the extended silence following the extended closing track, ‘Coogan’s Bluff’. The other disc features several Peel and Radcliffe session tracks from around the album’s release, plus most of the content of their 7-inch singles prior to this album, which are even more impossible to find. (All told, spotting The Heads in the wild is practically a game of cryptozoology: they play live in the UK about three times a year and their records are almost all either on labels that shut down or released in minute amounts.)

The quartet didn’t really fit into any comfortably defined niche at the time, and they still don’t now. The band had been inspired by the repetitious cold-sweat fuzzouts of Loop and Spacemen 3 at their inception in the early Nineties, and you can hear that on parts of Relaxing such as ‘Woke Up’. However, you can more clearly hear that they were drinking from the same bowl as Monster Magnet, Kyuss, Fu Manchu, Acrimony (possibly the UK band sonically closest to The Heads at the time) and whoever else would come to define ‘stoner rock’. A tag that’s never really sat easily on their heads either. Doesn’t stop ‘Quad’ and ‘Don’t Know Yet’, the album’s opening pair, sounding like dragstrips and corndogs and Heaven Hill whiskey. ‘Television’, the single from Relaxing, appears conflicted: “Television, television, television it sucks my time / Carrie Fisher, Carrie Fisher, Carrie Fisher, she looks so fine.” I’m not arguing, but… why Carrie Fisher, in the mid-Nineties? We may never know. Later on, a rare melancholy seeps in to the buoyancy in the form of ‘Taken Too Much’, which describes “crawling home… no dog or bone” and probably needs no further explanation.

To commence the second disc we have a 1991 version of the oh-no-you-didn’t-titled ‘Spliff Riff’ – it’s three years before their debut single still, but it doesn’t sound like amateur hour in here, although it sounds awfully like the (then still operational) Loop, maybe with some extra Hawkwind pills for equilibrium of mind. Although most of the songs here also ended up on Relaxing, their outlook – certainly their production values at least – has both feet in the garage, with a Mudhoney-type jones for proto-metal moves that results in a cover of MC5’s ‘Looking At You’. ‘Steamroller’, ‘Television’’s B-side, could pass for The Scientists or another of those sarcastic Australian garage bands from the Eighties. ‘Jellystoned Park’ (even taking into account that this was an era where you could walk through any town centre and see someone wearing an ‘ADIHASH – FOR GRASS SPORTS’ t-shirt, this is one cannabis pun too many) is an aimless plodding jam which, if it had words, would surely be celebrating the fact that Hugo Morgan and/or Simon Price (not the broadsheet music journalist) had just bought a new wah pedal.

Like I say, Relaxing with The Heads doesn’t have much to do with what’s ‘happening’ in 2010. Their effectively non-existent schedule notwithstanding, The Heads will probably make another great record at some point – certainly they did after this one, such as 2002’s Under Sided – and you seriously should see them live if you get the opportunity. The fact that this has lain in purgatory for years and has scads of scorching, slightly scrambled psychedelic heavy rock tunes that most people have never heard is more than enough reason for it to exist.