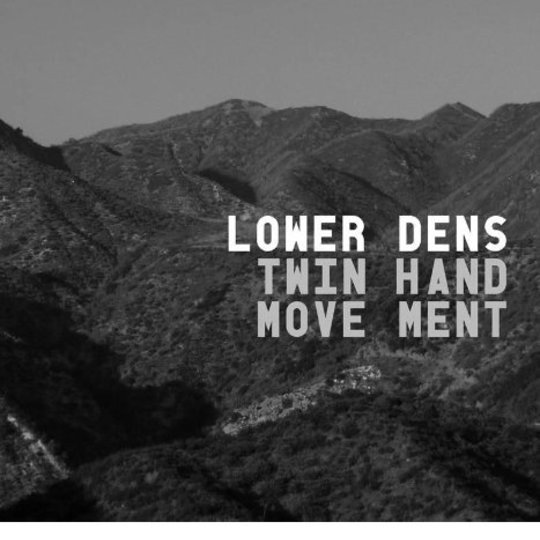 I wasn’t aware of Jana Hunter or any of her musical output prior to forming Lower Dens, but this seems to be the obligatory catch-up. Texan born but now residing in Baltimore, first person to release an album on Devendra Banhart’s label, Gnomonsong, erstwhile purveyor of scrappy and sparse folk-tinged textures, largely off radar since 2007 and now going electric with the conventional two guitars, bass and drums line-up of Lower Dens. With both going through such a specific aesthetic switch and a move away from more acoustic-based arrangements, it’s a transition that brings to mind Casey Dienel and her recent release under the White Hinterland moniker (given a glowing review on this site by some try-hard word-bird. “Asomatous”…shakes head in disgust), both combining intermittent pop hooks with pervasive layers of sound, both shaping them around a breathy and languorous vocal centre-point, and both conspiring to make some of the best music of 2010. Like Dienel, Hunter seems to wear her influences on her sleeve, but the quality of their output is such that it never seems tired, overtly calculated, or anything less then completely captivating.

Writing the liner notes for this year’s re-release of Today, Stewart Lee describes Galaxie 500’s ‘velvety pop-drones’, ‘toilet cubicle mysticism’, ‘minimal melodies’, ‘psychedelic stretches’ and ‘sloppy punk mess’. Those same phrases suit Twin Hand Movement perfectly, and like Galaxie 500, Lower Dens are able to take the most standard combination of instruments and render them garden-fresh by allowing each ample opportunity to stretch out and manoeuvre alone into gaps and spaces whilst simultaneously combining to form an arresting whole. Like Galaxie 500, Lower Dens know when to hold back and when to push forward, how to manipulate the dynamics of a rhythm for maximum effect, when empty space is more powerful than noise, and when noise is perfectly placed to suffocate and exploit an open space.

‘Blue and Silver’ adopts a hazy tick-tock slow-build like a clock threatening to break free of its standard speed, terse and compact, open and searching, it’s a car trapped by the constrictive straights of the road yet surrounded by stretching landscapes that forever hint at escape. Finally the tension peaks and everything breaks down and explodes into release. ‘Tea Lights’ makes it feel like you’re hearing the combination of drums, guitar and bass for the first time, so delicate and instinctive is the interplay between the three as they come together to form a foggy partnership that’s constantly threatening to buckle under the weight of its own malaise, twinkling and flickering and falling away like the tiny flames of the title. Whereas ‘Two Cocks…’ is a pulsating stretch of Neu!-like propulsion that closes the album with a strong, confident finale and flourishes like an attempt to dust away any of the brittle uncertainties that have gone before it.

There are songs of individual brilliance here, but the tenebrous atmosphere created throughout is king. It could easily be described as funereal, but only because it has the ability to articulate the absurdity, excitement, beauty and pitch-black-hilarity that comes with the murk and despair. Hunter sings like a woman who’s at once completely lost and exhausted but also secretly in on the big joke and struggling to hold back a weak grin. With Twin Hand Movement she has created an album that soars without ever needing to deliver anything so obvious or clichéd as a punch line.