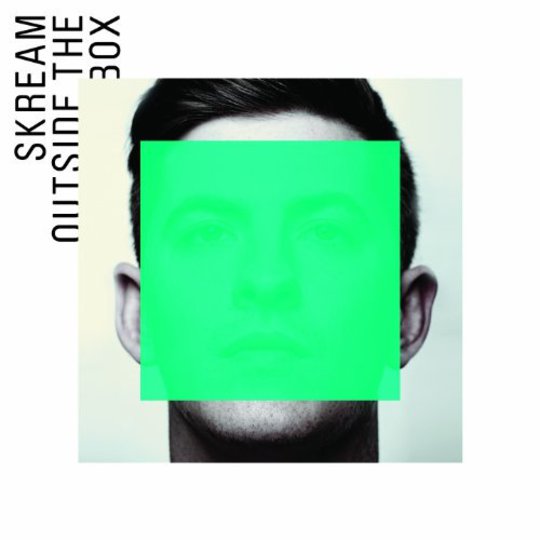 I’ll spare you the usual raft of opening platitudes about the surprisingly wide-reaching and fertile state the community surrounding dubstep has found itself in 2010, but needless to say the release of a new album from one of the genre’s originators will be seen as A Big Deal in many circles. Unlike almost all of his contemporaries (the only exception perhaps being Hyperdub label headman Kode9) Ollie ‘Skream’ Jones’ reputation as a shapeshifter precedes him. There are very few other producers who can match him in either the productivity or the versatility stakes, which has led to an intriguing split personality: he seems able to alternate between predictably one-dimensional rave tracks, stormy slabs of heady early-styled dubstep and slow, contemplative pieces without even breaking a sweat. For a little evidence, it’s certainly worth picking up the three Freeizm compilations he’s just made available for free download in the run up to the release of his new album, Outside The Box – they purge a portion of his sizeable unreleased archive and neatly show off every side of his oeuvre.

Still, there are risks inherent in Jones’ combination of prolific output and constant change, not the least of which is a tendency towards inconsistency. Despite the pace at which he produces, Outside The Box is only his second album in close to a decade of production, the gaps being filled in with (fairly) regular Skreamizm EPs and a neverending stream of white labels and individual 12-inch releases. And for the most part they’re great – when Skream’s productions are good, they’re very good, retaining the dark swing and dubbed out mood of his earliest music and melding it to a populist sensibility that borders on the anthemic. But at times there’s a nagging feeling that he’s almost too wide ranging. His 2006 debut, Skream!, certainly had its moments – the utterly seminal grime-tinted ‘Midnight Request Line’, JME’s paranoid turn on ‘Tapped’ – but for the most part it felt disjointed and sprawling, lacking the focus and intensity of his best work. Although his production values and profile have skyrocketed since, the same is largely true of Outside The Box, an album so densely packed with ideas that it feels diminished by a lack of obvious direction. It’s certainly a far cry from what you’d expect of a ‘dubstep’ album in 2010.

But then it’s best not to think of Outside The Box as a dubstep album anyway. These days, what most would call that genre is only a single component of Skream’s arsenal. Sure, he can still put together deep and bassy rollers with the best of them, but like his music as part of Magnetic Man, this new album seems to have provided him with the space to experiment with other forms – two-step, drum ‘n’ bass, even forays into straightforward pop. And there is an undeniable pop suss at work here – ‘How Real’ is a neat little UK garage throwback, and ‘Finally’ features La Roux on a slow-burner a million miles from the chilly atmosphere of his ‘In For The Kill’ remix. ‘Eight Bit Baby’ even pushes towards US hip-hop crossover territory. At times, the Eighties-style synths sound more like a modern update of classic electro-pop than an evolutionary step onward from earlier tracks like ‘0800 Dub’ or ‘Rottan’.

That said, there’s still an awful lot of old Skream within Outside The Box, and it’s these moments – the sax-led melancholy of ‘Fields Of Emotion’, the fast-paced hardcore breaks that pepper ‘Listenin’ To The Records On My Wall’ – that remain most impressive. Dotted around between experiments in other styles they lose a little of the visceral impact of a concise 12-inch, though, and act as focal points in an album that aims for widescreen variety but loses something of the nervous energy Skream’s music has always been renowned for. Even the Autonomic drum ‘n’ bass of ‘Reflections’, featuring Instra:mental and dBridge as co-producers, packs less of a punch than their previous collaborations. As ever, it’s impossible to deny Skream’s obvious talent, and it’s equally hard to begrudge him this move into the sphere of widescreen appeal when he remains a singular musician, but it’s hard not to feel that his sound is best experienced in the way it first began to emerge – in single format. His music thrives off the thrill of short, sharp shock tactics, as opposed to the sprawl that inevitably comes with a full-length effort. While Outside The Box should deservedly propel him further to the sort of mainstream acclaim he’s gradually reaching, hopefully it will also act as an opening for wider audiences to delve deeper into a thoroughly impressive body of work.