Church With no Magic 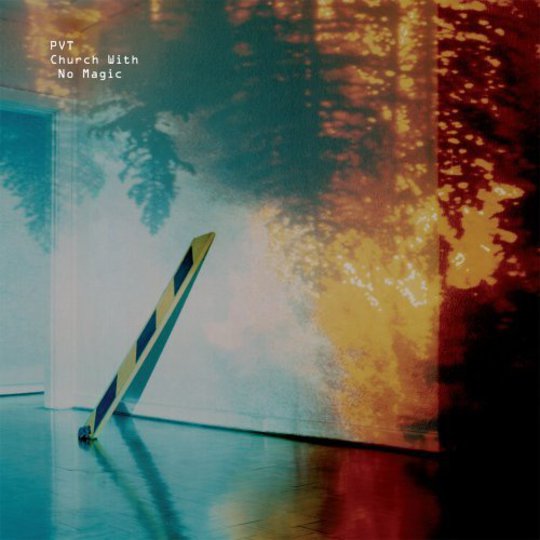 There's always been a nagging feeling with Pivot - now renamed PVT for slightly dull legal reasons - that they're close to being a really good band but fall a little short, due to sitting in an awkard middle ground between cerebral post rock, minimal electro and straight forward hit conjurers.

And rather frustratingly, Church With No Magic doesn't make their position in the indie world any more clear. In the two years that have passed since O Soundtrack My Heart, they've pushed Richard Pike to the forefront and got him to sing on the majority of the record. These vocals vary between the more coherent (on songs such as single 'Window' and the title track) through to utter abstraction, merely utilised for layered instrumental reasons. The whole 'feel' of Church With No Magic is grander, moodier and somewhat more direct in fact, partly due to this change, but more down to the haunting, distant reverberating production values of Dave Miller and Laurence Pike's ever-impressive drumming. Both aspects fade in and out of proceedings, getting their brief moment in the spotlight before taking a backseat to let another string of the band's bow get its five minutes of fame.

Of the more direct tracks here, 'Light Up Bright Fires' is the most interesting, inhabiting a world somewhere between Battles and Serena-Maneesh before ending in a cascade of layered electronic euphoria. Church With No Magic is the closest thing the record has to a straightforward anthem, powered by a relentless rhythm and some wonderful bass underpinning. 'Window' is the least successful of the trio, never quite committing itself whole heartily to the pop song it strives to mask, though it flirts with some incredibly complex ideas along the way such as subtly changing the time signature mid refrain.

It's elsewhere that the album fails to find a solid foothold. The sombre, dirge like 'Crimson Swan' explodes into life at its midpoint and is almost almighty, but the fluctuating pitch shift which layers it gives the whole affair an Eighties sci-fi flick feel. It's a trick which is repeated again on the altogether less engaging 'The Quick Mile' and most criminally on 'Timeless', which sounds so heavily indebted to Portishead's Third (and several of the bands they too 'borrowed' from) that I had to check my iPod hadn't skipped tracks.

Yet when they remove themselves from this awkward middle ground and return to the more abstract, such as the eerie opener 'Community' and the haunting howls on the album's finale 'Only the Wind Can Hear You', you can't help but find yourself wanting to give it all another chance.

With each subsequent listen, the readout dial wavers more wildly between the 5 and the 9 mark, never quite deciding on where it will come to fall. The enigma that is PVT, then.