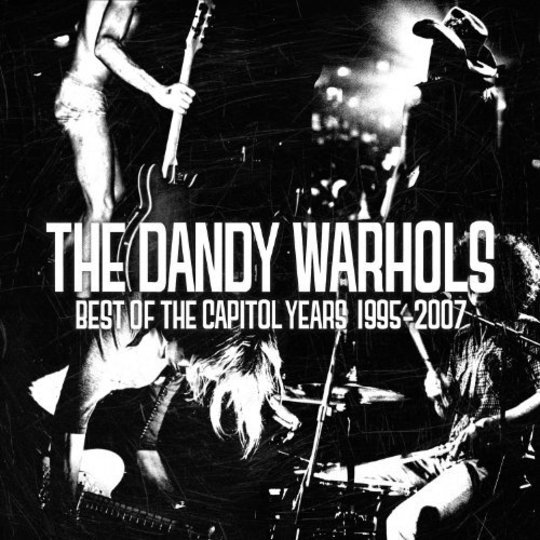 Despite a shamelessly orchestrated effort to position their own pouting hipster credentials front-centre of the listening experience, the thing that first springs to mind upon hearing The Dandy Warhols' music will forever be - in this country, at least - aggressive mobile phone retail. Even if your first whiff of their handclap-happy oeuvre didn’t come courtesy of Vodaphone, chances are it came via the TV in one way or another: hit up the band’s Wikipedia entry, and you’ll notice an entire section dedicated to 'Uses of The Dandy Warhols' music in media.' Scroll down to it, and recoil in horror upon discovering a link to a SEPARATE DEDICATED PAGE. Amid the current glut of label-impoverished DIY darlings, this feels dirtier than humping a fistful of your own vomit.

In fairness, though, the band have actually released a reasonably impressive nine records (including a B-sides collection, an ‘alternate mix’ LP and their initially rejected, later self-released second effort The Black Album) between 1995 debut Dandys Rule, Ok? and this era-specific Best Of. With the exception of previously unreleased album closer ‘This Is The Tide’, all 15 tracks on The Capitol Years are culled from their four best-known releases to date - ...The Dandy Warhols Come Down; Thirteen Tales From Urban Bohemia; Welcome To The Monkey House; and Odditorium Or Warlords Of Mars. (Being pedantic, a couple of cuts are in fact taken from The Dandy Warhols Are Sound, last year’s ‘original mix’ re-release of 2003’s Welcome To The Monkey House.)

The nostalgia-drenched opening salvo of ‘Boys Better’, ‘Every Day Should Be A Holiday’ and ‘Not If You Were The Last Junkie On Earth’ catapults us giddily back into the midst of the disorientating late-Nineties Britpop hangover that saw us emerge blinking into the cold light of day, reeling over images of our pop icons mooching around 10 Downing Street. The only possible course of action was to drop sanctions and start letting a few overseas types back into the charts, and ‘Not If You Were The Last Junkie On Earth’ arrived with the vanguard: snake-hipped in vintage flares, burnished under sleepy Portland sunshine, but chugging along on the sort of mid-paced four-chord jangle that our own musical nation is built on. As such, it felt like the perfect hair-of-the-dog tonic – and, in many ways, it still does.

Appropriately enough, frontman Courtney Taylor Taylor (grrr) opts for a flattened vocal melody on near-identical companion piece ‘Boys Better’ that makes it sound a lot like ‘Horse With No Name’ by Anglo-US folk rockers America. ‘Every Day Should Be A Holiday’, meanwhile, rolls a far spikier riff in a coating of reverb that would set even Kevin Shields’ teeth on edge, before dropping it into a barrel of Bernard Butler’s prize electric eels and leaving it to sizzle. It’s probably the best thing on here. ‘Good Morning’ suffers a needlessly lengthy intro from which it never really recovers, eventually shuffling into to position as a bleary, nakedly Velvet Underground-aping dirge, while the muted trumpets of ‘Godless’ make it sound like an escapee from, um, The Great Escape. And it’s around this point that you begin to acknowledge the emergent, unavoidable truth: pretty much every single track on the opening half of The Capitol Years sounds alarmingly like something else that came before it. This peaks dizzyingly at the record’s mid-point with the Vodaph-...sorry, with ‘Bohemian Like You’, which actually is ‘Brown Sugar’ stapled on to the intro from The Specials’ ‘Little Bitch’.

Happily, the latter half of The Capitol Years takes a fairly dramatic turn, ushering in the slick, eyebrow-raising electronica of Welcome To The Monkey House via ‘We Used To Be Friends’ (breathy, glitch-laden verses erupting into fizzing, nuts-in-a-fridge-door chipmunk chorus) and the implausibly rubbery, Ladytron-lite pogo of ‘Scientist’. ‘The Last High’ and ‘Plan A’ are slightly queasy halfway houses between this newly revamped Dandy Warhols and the FM-friendly swagger of their earlier sound (‘Plan A’, in particular, feels upsettingly misshapen). Bringing things to a close, a trio of cuts from Odditorium bring us almost full-circle: ‘Holding Me Up’ assumes the trademark Dandys mid-tempo chug, squatting infuriatingly in the middle lane and refusing to shift forward or back for over seven minutes. ‘All The Money Or The Simple Life Honey’ is more like it; a clattering jukebox bimbo that gradually infects despite being a barely-concealed homage to the Rolling Stones’ Sticky Fingers/Exile On Main Street era.

Previously unreleased final track ‘This Is The Tide’ attempts to disrupt the strange circularity evident across The Capitol Years, coughing up a distorted vocal and a more aggressively scuzzy riff than we’re used to, but yet again it settles into that staunchly predictable Dandys groove that they seem wholly unwilling to experiment with. This collection does have its moments, but they can’t disguise the fact that compressing over a decade’s worth of recording into a single package does Taylor et al’s back catalogue no favours. They emerge looking like the Brompton Bicycle of US indie bands: retro-styled, repeatedly flirting with hipster status, but oddly clunky and with precious few speed settings.